Put Up, Holed In, and Salted Down 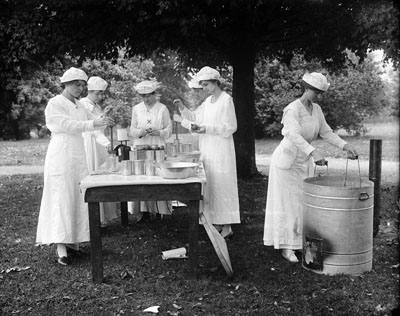 Before the days of fancy, colorful packages that lure shoppers to grocery store shelves and frozen foods counters, preserving food—keeping it safe to eat later—took ingenuity and creativity.

Meeting basic human needs for food, clothing, and shelter has gotten easier through the centuries. Technology has reached the point that we can store enough food to last us for years. But from the time of early European settlement in North Carolina through the early to mid-1900s, people used many other methods to preserve food. Some are still occasionally used today. The “old ways” worked fairly well until the techno revolution of the past thirty to fifty years brought us electric refrigeration and other conveniences.

The type of food, of course, helped determine the best preservation method. Corn and pork were the most common staple foods, since farms could produce them in large quantities. Corn could be stored in several forms—kept in cribs while still on the cob, shelled, or ground into cornmeal. Pork also could be preserved in different ways. Most early settlers used a smokehouse, hanging hams and other large pieces of meat in a small building to cure through several weeks of exposure to a low fire with a lot of smoke. The process began around November. The meat would keep all winter and most of the summer. Some people still use this method on a limited basis, but most buy pork in the grocery store already cured.

Another way to keep pork was to “salt it down.” Most families had a shelf in the smokehouse, a bench or table in another building, or a box that could be used for storing meat. They placed the meat on a layer of salt and covered it with more salt, sometimes mixed with pepper and brown sugar. Salt draws moisture out of meat and thus stops the process of rotting. Some people later stored the meat buried in shelled corn, because the corn was a good insulator. Today removing moisture through low heat exposure over time, or through the use of salt, creates jerky and other dried foods. Over the years, people also have used salt and water mixtures to preserve many foods, such as fish or vegetables, by pickling.

Earlier North Carolinians often preserved vegetables by stringing them up to hang by the fireplace or in another warm, dry area to remove moisture. To prepare the vegetables for eating, people would soak them in water for a while. Beans prepared in this way were called “leather britches” because of their toughness after drying. Fruits, pumpkin, squash, and other foods could be kept in this way for months at a time.

Most homes years ago had a root cellar, where families kept food in a cool, dry environment. They stored apples and other foods in piles of sawdust or in containers filled with sawdust or similar loose material. Since the late 1800s, people have canned food and stored it in such places as the cellar.

One method rarely used today for preserving root crops such as potatoes and turnips was called “holing in.” People would dig a pit that was lined with sawdust or straw, place the foodstuff in the pit, and cover it with more sawdust or straw. Finally, they would place boards, tin, or a similar material on top. A similar method still is used in the Mountains of North Carolina. This method involves digging a furrow beside cabbage rows in a garden, pulling up the cabbage, placing each head upside down in the furrow, and covering it over with loose dirt. The cabbage turns white during the passing months but retains its flavor. Cabbage can be preserved in this way until time to plant again. Most of the time it gets eaten well before then!

Before refrigerators, the springhouse was a fixture around most homes, providing a place to keep milk, butter, and other perishables from spoiling. Running springwater kept temperatures cool enough to preserve foods even on hot summer days. The “house” was a wooden structure with a roof built directly over the spring. It protected the food from animals and severe weather. In earlier days, people simply kept foods down in the water itself. Items like butter also might be kept down a well.

By the mid-1800s, a method of refrigeration had taken shape that seems rather crude when compared with today. People would dig icehouses into dirt banks in areas deprived of sunlight, line them with sawdust, and fill them with blocks of ice cut from frozen rivers and creeks. With proper care, the ice would last until summer. In later years—especially in larger towns and cities—the iceman delivered blocks of ice to residents for use in the home icebox, a sort of early pre-electricity refrigerator.

Each section of the state, and even each small community, had its own methods and techniques for preserving food before refrigeration. Most have slowly died away. Canning is still a common method used to “put up” vegetables and some fruits. It is not common anymore for preserving sausage or other meats, because freezing is much faster, cleaner, and safer. Drying is still popular for preserving some fruits, but freezers, refrigerators, and the convenient trip to the store have replaced most smokehouses and root cellars.

Food preservation has come a long way. The old tried-and-proven methods were simple and used very few additives or artificial preservatives, compared with some of the methods that replaced them. People seem to be returning to more natural techniques, since we have learned that some additives can be harmful. “Faster” is not always “better.” Just ask an old-timer about the taste difference between “home canned” and “store-bought”! No doubt the “home” method will win out every time.

At the time of this article’s publication, Terrell Finley was the regional museum administrator at the Mountain Gateway Museum and Heritage Center, part of the Division of State History Museums, in Old Fort.

Food preservation in libraries [via WorldCat].

Another way to preserve food

Another way to preserve food/get ice in West Virginia was the use of "ice caves". Locals knew where an ice cave was located and would "harvest" some ice for ice cream in the summer. I find it fascinating that these ice caves still exist!

I am writing to see if you

I am writing to see if you would grant me permission to use the photo "Home Demonstration of Canning, Mrs. Jane McKimmon, ca. 1908-1917." Photo by H. H. Brimley." in a charcoal display I am doing for Cloverdale Farm County Park located in Barnegat, NJ. The photo will be used in reference to how food was preserved.

If permission is granted please let me know how you would like the credit displayed.

Please see thee copyright notice above and contact the publisher for permission. Thanks

this was helpful to me thank

this was helpful to me thank you Finley and Terrell