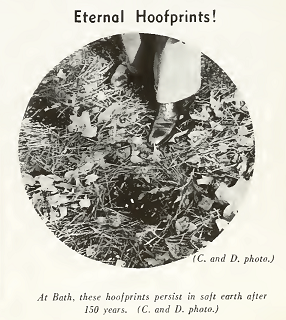 Devil's Horse's Hoof Prints near Bath are a series of small, saucer-shaped depressions reportedly in existence since 1813. Measuring four to five inches deep with sloping sides from six to ten inches, the holes remain the source of one of North Carolina's most famous and enduring mysteries.

Legend relates that on a Sunday morning about church time, Jesse Elliott and some companions planned to race their horses along the main street of Bath. Elliott mounted and spurred his horse, and as it raced off, he leaned forward shouting in its ear: "Take me in a winner or take me to Hell." Promptly the horse dug its hooves into the soft earth, throwing Elliot against a tree and killing him instantly. Some believe that the horse was actually the devil in the form of a horse.

Tradition maintains that the holes, located just off N.C. 1334, about 3.3 miles west of Bath, have survived every known attempt to permanently eradicate or alter them. Although the holes are located at the edge of a forested area, no vegetation grows inside them. None of the pine needles from the thick mat surrounding the holes ever remains in the earthen saucers. On their way to school, children have deposited various kinds of debris in the depressions only to find that the holes are empty upon their return from school. Countless visitors to the site have experienced the same phenomena.

Scientists have conducted studies at the site to provide an objective explanation of the intriguing holes. Among the most popular theories are that the depressions are vents for a subterranean water pocket or the result of salt veins.

what are the coordinates of

what are the coordinates of the prints?

Would be nice if we could get

Would be nice if we could get permission to see and go there, to show others what I saw as a youngin and let them experience the same thing.

Actually, he was on his way

Actually, he was on his way to a race and was riding along side another man also headed to the race. This other man was mounted upon a very large black horse and was wearing all black with a hat to make his face invisible. Elliott challenged him to a little race on the way to the actual race and as he was passed by the man on the black horse, Elliott's horse flew into a tree killing both instantly. There is no record of anyone with a straight black horse (no markings whatsoever) at the race. People have also tried to cover the tracks with cement but nothing worked. They also used to charge admission but now it is free and open to the public.

What is the actual location

What is the actual location if you wanted to see the hoofprints?

Thank you for your question!

According to this article published by the Division of State Historic Sites and Properties, the footprints are "about a mile west of bath," but are on private property and so cannot be accessed by the public:

take off the word hell

take off the word hell