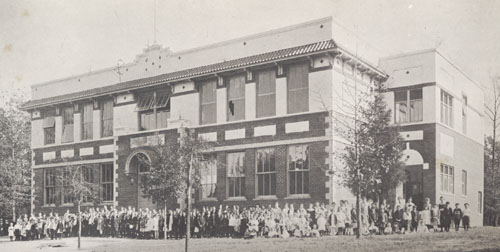 East Carolina University, located in Greenville, traces its origins to the East Carolina Teachers Training School, which came into existence amid substantial controversy in 1907. After competing with seven other localities, Greenville was chosen as the site for the campus, largely because of Pitt County's offer of 243 acres and $100,000 for a new facility. Much of the success of East Carolina during its initial years can be attributed to the dynamism of school president Robert Herring Wright. A Sampson County native who had studied at the University of North Carolina, Johns Hopkins, and Columbia University, Wright led East Carolina from 1909 to 1934. He inaugurated the institution's first four-year curriculum in 1920, and East Carolina Teachers Training School changed its name to East Carolina Teachers College the following year. In 1922 the first Bachelor of Arts degrees were awarded, and seven years later the first Master of Arts program came into existence.

Leo Warren Jenkins, a New Jersey native and chief executive of East Carolina from 1960 through 1978, oversaw the period of greatest expansion for the institution. More than any other individual, he was responsible for its metamorphosis from a provincial college to a doctorate-granting university of national stature. The student body virtually tripled in size during his tenure. In the fall of 1963, East Carolina's first African American student, Laura Marie Leary of Vanceboro, matriculated. The 1960s also witnessed the creation of the Schools of Business, Art, Music, Education, Arts and Sciences (with 19 departments), and Nursing. The East Carolina Manuscript Collection was opened to scholars in 1965, and the Schools of Allied Health and Social Professions, Home Economics, and Technology came into being during the last years of the decade. In 1967, thanks to the General Assembly's Henley Bill, which reorganized higher education in North Carolina, East Carolina College achieved university status. The School of Medicine, a dream that started with the establishment of the Health Affairs Division, received funding to establish a four-year program in 1974 and enrolled its first class in 1977.

By the early 2000s East Carolina University was the third-largest institution in the consolidated University of North Carolina System, with a total enrollment of nearly 20,000 students, 102 undergraduate degree programs, and 85 graduate degree programs. The School of Medicine, while addressing the health care concerns of the region, is also a pioneer in robotic surgery and telemedicine.