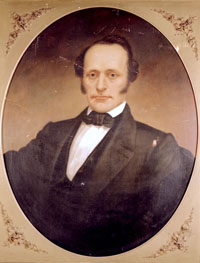 John Willis Ellis (1820-1861) led North Carolina out of the Union and into the Confederacy. The son of Anderson and Judith Bailey Ellis, he was born on November 23, 1820, in eastern Rowan County (later Davidson County). He attended Randolph Macon College for one year before entering the University of North Carolina from which he graduated in 1841. Ellis then studied law under Judge Richmond M. Pearson and set up his practice in Salisbury in 1842. He was twice married, first to Mary White, who died only two months after their 1844 marriage. On August 11, 1858, six days after his election as governor, Ellis married Mary McKinley Daves, daughter of John Daves of New Bern. They had two daughters.

A Democrat, Ellis was elected a member of the House of Commons in 1844. In 1848, Dorothea L. Dix selected Ellis as liaison to champion her call for the establishment of an insane asylum. Ellis was twenty-eight when the General Assembly elected him a judge of the Superior Court, an office he held until 1858 when he won his party’s nomination for governor. Ellis handily defeated his opponent, Duncan K. McRae.

As governor, Ellis pushed for faster movement of railroad freights, better plank roads and turnpikes, improvements in education, and completion of delayed river navigation projects. Hanging over his accomplishments, however, was the growing cloud of secession and sectional crisis. Running for reelection in 1860, Ellis denounced the abolitionists but steered clear of advocating dissolution of the Union. He used the constitutional question and southern rights to overshadow the issue of ad valorem taxation which was the trump card of his Whig opponent, John Pool. Even so, Ellis won by a much smaller majority than he had two years earlier.

On November 20, 1860, Ellis outlined a three-part strategy: participation in a conference of southern states to discuss the situation in the country, a state convention of the people to establish North Carolina’s position, and reorganization of the militia including creation of a corps of volunteers. In his inaugural address on January 1, 1861, he continued to urge moderation, but a group from the Wilmington area decided to seize Forts Caswell and Johnston despite the governor’s objection. He immediately ordered them to return control to the Union.

By early March deteriorating relationships had convinced Ellis that the state would soon have no choice but to join the Confederacy. When President Lincoln called for troops in April to put down the insurrection, the governor placed the state’s sympathies with the South. After answering the president “You shall get no troops from North Carolina,” Ellis ordered state troops to seize all federal forts and the Fayetteville arsenal, closing with a telegram to Confederate President Jefferson Davis, indicating that the state would support the Confederacy fully. All that was left was to make secession official at the May 20 convention.

Years of riding the circuit as a judge had weakened John Ellis’s health. Battling consumption, he tried to govern from a sick bed, relying upon a committee to help in decision making. He forced himself to make public appearances to maintain the morale of the people but finally gave in and, in a futile effort at recovery, journeyed to Red Sulphur Springs, Virginia. He died there on July 7, 1861, at age forty-one. Governor Ellis’s first burial took place in the family cemetery in Davidson County, but his remains later were removed to the Old English Cemetery in Salisbury.

i have been told that JOHN

i have been told that JOHN WILLIS ELLIS IS MY Great GREAT Uncle.MY Great Great Grandfather was CPL James Martindale from the 26th Regiment of Chatham County and fought at Gettysburg.Could you please find out for me.James had fifteen children and 2 wives.he was my Grand MOTHER'SGrangfather Helen Gertrude Martindale then a Fargis

John Willis Ellis was the

John Willis Ellis was the father of my great great grandfather. He was the son of a slave woman name unknown. I felt it nessisary to tell this part of his story because I do not see my grandmother father listed any were is his life story. David William Ellis was born on the plantation that John's father owned. Thank you for allowing me to tell my story.
David William Ellis
B:
May 1847 in North Carolina
D:
9 Nov 1905 in North Carolina, USA

Your story on John Ellis

Your story on John Ellis suffers from major sequencing errors and voids in coverage. In his Papers and other sources, it is obvious that prior to secession in May, 1861, he is [1] expanding the governor's commander-in-chief powers vastly beyond need or any previous conception of the governorship, [2] directly involved in the formation of militias far beyond NC's needs (in other words preparing for secession & war), [3] investing major energy in procuring funds, weapons, manpower and cooperation with other slaveholding states on military matters; [4] exercising major influence at the secessionist Goldsboro Convention (late March 1861) to offset the Feb, 1861 vote by the legal voters of NC not to hold a convention) and at the May, 1861 Secession convention, through his cooperative work with the floor leader of both conventions, Burton Craige, also of Rowan County; [5] acting as THE liaison with Davis, Benjamin and other Southern state representatives in their contacts with NC secessionist (Benjamin wrote the adopted NC secession ordinance and it was passed to Craige for action by Gov. Ellis); and [6] his sending of weapons to other states prior to secession, to mention a few of his secessionist actions. Also, why is not relevant that he is a planter and a very large slave owner? In my comprehensive compilation of the NC men involved the 1860-61 political actions taken by the Governor and members of the NC legislature documents them voting their vested interests, in their own judgment. Imagine what would have been the fate of John Ellis, taking such actions, if Andrew Jackson had been President instead of the ineffectual James Buchanan. In his own words, from his 27 April 1861 letter to Jefferson Davis, he says: “I have the honor to communicate to you the present condition of affairs in No.Car. The State is to all intents practically out of the Old Union, and we are deciding the speediest mode of giving legal sanction to this State of facts. Unexample unanimity prevails and we will be a member of the Confederate states by the 20th May."

Thank you for taking the time to post your thoughts and opinions. I have forwarded them to the Research Branch of the NC Office of Archives and History, from which the article originated.