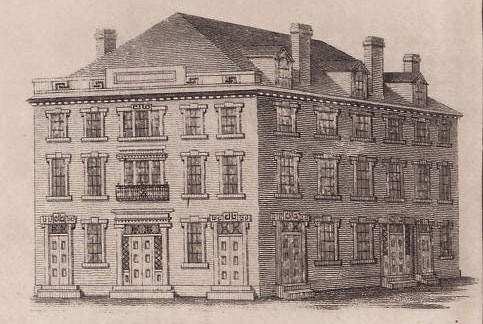 Fayetteville is the county seat of Cumberland County.  It was authorized in 1783, renaming the already amalgamated towns of Campbellton and Cross Creek (or Upper and Lower Campbellton) for the Marquis de Lafayette.

European settlement began in earnest in the 1730's, with Scots predominating among the early inhabitants.  The two towns that became Fayetteville grew up on opposite sides of the Cape Fear River, and beginning in 1762 Campbellton was designated as the county seat.  The mixture of Scots, Irish, and English settlers brought strong political and social divisions them, so that the communities provided evidence of both Revolutionary ideals (Liberty Point Resolves, 1775), and Loyalist sympathies (Flora MacDonald's speech to Loyalists before the Battle of Moore's Creek Bridge, 1776).

With no fixed center of government until 1794, Fayetteville sometimes acted as the temporary capital of North Carolina, with the legislature meeting there in 1786, 1788-90, and 1793/4.  In 1789, a special Convention met in the town and ratified the U.S. Constitution for the state.  Lafayette visited the town during his grand tour of the states in 1824-25.

In 1831, a devastating fire consumed much of Fayetteville, with more than 600 buildings damaged or destroyed.  The Market House, now a National Historic Landmark, was built in 1832 on the site of the old state house, which had hosted the Constitutional Convention.  When a similarly devastating fire consumed the State House in Raleigh, Fayetteville was considered as a possible replacement capital.  An arsenal was completed in the 1840's and played a major role in supplying arms to the Confederate army during the Civil War before being razed by General Sherman's army in 1865.

Post Civil War growth was slow, as the population of the city hovered around 5000 until 1910.  Fayetteville was transformed in 1918, when construction began on Camp (later Fort) Bragg, which encompassed more than 100,000 acres of land, with Pope Air field (now Pope Air Force Base) built nearby.  By 1941, the camp population had grown from just over 5400 to 67,000.  Fayetteville's population similarly grew, topping 17,000 by 1940, and doubling again by 1950. The city is ineluctably tied to the military, with almost $4 billion in annual revenues generated by the presence of the two major installations.

Fayetteville hosts two colleges: Fayetteville State University (started in 1867 as Howard School) and Methodist University.  The city is also home to the Museum of the Cape Fear and the Airborne and Special Operations Museum.

Oates, John A. 1950. The Story of Fayetteville and the Upper Cape Fear. Charlotte: The Dowd Press Inc.

it was pretty good since i'm

it was pretty good since i'm a fast reader i was able to read it in a breeze.

eh, its a pretty good article

eh, its a pretty good article

Good if you're doing a report

Good if you're doing a report but otherwise boooooorrriiiiiiiinng.