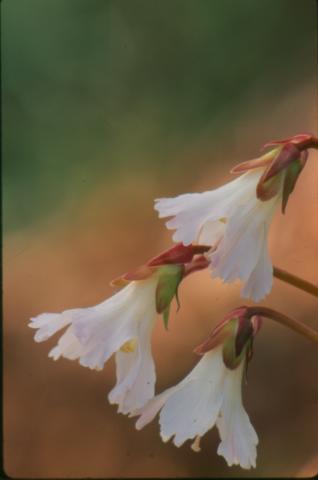 Oconee Bells is a rare and beautiful plant found only in a few counties in the southern Appalachian Mountains. The low-growing evergreen perennial enjoys the deep shade of moist well-drained slopes, banks, and rock outcrops. Delicate pink or white bell-shaped flowers bloom in early spring. Glossy round leaves stay on the plant all year, but turn from green to deep reddish-bronze in the winter.
There are two varieties of this species, Northern Oconee Bells (Shortia galacifolia var. brevistyla) and Southern Oconee Bells (Shortia galacifolia var. galacifolia).  The common name comes from Oconee County in South Carolina, where the southern variety thrives. The scientific name comes from Dr. Charles Short, a botanist friend of Dr. Asa Gray, who first named the plant. The species name, galacifolia, refers to the glossy round leaves, which resemble Shortia’s near relation, Galax. The two varieties of Shortia galacifolia differ primarily in the length of the floral parts: style, filaments, and corolla lobes, “var. brevistyla” being the shorter of the two.
Northern Oconee Bells are endemic to McDowell County, North Carolina, meaning that they grow only there and nowhere else in the world. Southern Oconee Bells can be found in two North Carolina counties, Transylvania and Macon, though they once grew in Swain and Jackson counties as well. Populations of Southern Oconee Bells have also been recorded in the mountains of South Carolina, Georgia, Tennessee, and Virginia.
The tale of Oconee Bells’ discovery stretches over a century and involves some of the greatest botanists of America and Europe. The plant was first collected by Andre Michaux during his travels near the headwaters of the Keowee River in 1788. Michaux returned to France with the unidentified specimen, which was found in his Paris herbarium 51 years later, in 1839, by Asa Gray, who recognized it as a new genus. Finding Oconee Bells growing in the wild proved more difficult. 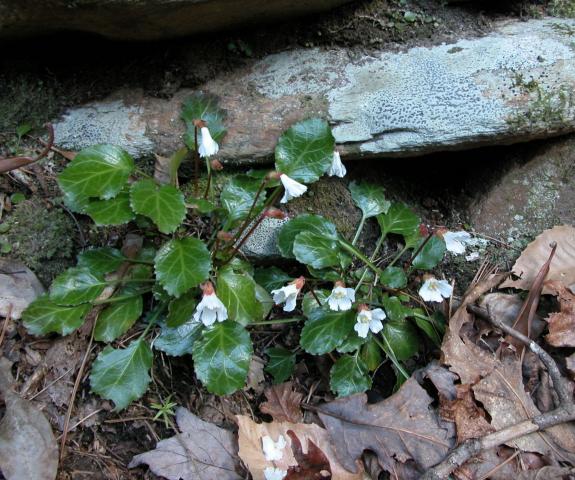 Although Dr. Gray searched on several occasions, he was unable to locate the original source of the plant he had seen in Andre Michaux’s herbarium in France. In 1877, George M. Hyams, the seventeen year old son of an herbalist, found Shortia growing on the banks of the Catawba River, far from where Michaux had collected his specimen. Dr. Gray visited the Catawba population in 1879, on one of his explorations through the North Carolina mountains.
It was another botanist, Charles Sprague Sargent, who carefully followed the directions from Michaux’s journal and, in 1888, finally found the “lost plant” at the junction of the Toxaway and Horsepasture Rivers. This site was flooded in 1973 by construction of the hydroelectric dam that created Lake Jocassee, but thanks to the efforts of dedicated plant lovers, many of the beautiful Oconee Bells plants were rescued and relocated.
Northern Oconee Bells is protected as an endangered plant and Southern Oconee Bells is protected as a  vulnerable plant in North Carolina and neither may be collected from the wild. Both varieties of Oconee Bells are listed as Federal Species of Concern, which means that they may be considered for federal protection in the future.
References:
“Database Search” North Carolina Natural Heritage Program, North Carolina Department of Environment and Natural Resources (accessed July 29, 2014)
Elliott, Charles. "The Long Trail of Shortia." Horticulture Magazine. August 2001. Reprinted in two parts in Appalachian History: Stories, Quotes, and Anecdotes. (Accessed June 27, 2014)
Part 1: http://www.appalachianhistory.net/2011/05/the-long-trail-of-shortia-part...
Part 2: http://www.appalachianhistory.net/2011/05/the-long-trail-of-shortia-part...
Jenkins, Charles F. "Asa Gray and His Quest for Shortia galacifolia." Arnoldia, 1946. Online at http://arnoldia.arboretum.harvard.edu/pdf/articles/1942-2--asa-gray-and-his-quest-for-shortia-galacifolia.pdf. (Accessed June 27, 2014)
Marlow, Jane. "Oconee Bells, Southern Shortia." Native & Naturalized Plants of the Carolinas & Georgia. (Accessed June 27, 2014)
"Protected Plant Species List." North Carolina Plant Conservation Program, NC Department of Agriculture and Consumer Services. (accessed July 29, 2014)
Redfield, John Howard, John Marsh, and W. C. Redfield. 2012. In Search of Shortia: with Asa Gray in North Carolina 1879. Dillsburg, PA: John Randolph Marsh Publications.
Image Credits:
Oconee Bells, Shortia galcifolia, by Kevin Adams, 2006
Northern Oconee Bells, Shortia galacifolia var. brevistyla, by Andrew Buchanan, 2006.
Subjects:
Natural resources
Pioneers and Explorers
Plants
Authors:
Sorrell, Mickey Jo
Origin - location:
Macon County
McDowell County
Transylvania County
From:
NC Natural Heritage Program, NC Dept. of Environment & Natural Resources.

I found clusters (more than 1

I found clusters (more than 1, like 3)of oconee bells in Linville nc.....
Is there something I should mark them with ? So no one messes with them?or something I can for to protect them?

You may want to contact someone with NC Department of Agriculature Protected Plant Conservation division at http://www.ncagr.gov/plantindustry/plant/plantconserve/plist.htm.

I found one cluster of pinks

I found one cluster of pinks at Devil's Fork State Park's Oconee Bell Trail. It was along the stream near the end of the boardwalk.