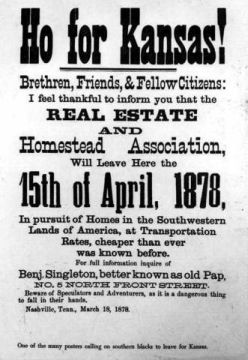 Exodusters were African Americans who fled North Carolina because of economic and political grievances after the Reconstruction era. Although there was a steady trickle of black emigrants from the state before 1900, the outflow assumed such immense proportions during two periods that it was labeled an "exodus." The first mass departure took place from 1877 to 1880, peaking in 1879. It resulted in part from an amendment of the 1876 Landlord and Tenant Act that required a tenant to pay for supplies and rent before he received any part of his crop. Blacks were also troubled by the county government system, under which the legislature chose justices of the peace who, in turn, appointed commissioners to administer county government. The white commissioners in eastern counties with dense black populations prevented African Americans from gaining a foothold.

In the late 1870s, whereas most blacks from other southern states mainly migrated to Kansas, many black North Carolinians went to Indiana. One black, Sam L. Perry, was credited with masterminding this exodus. Eastern newspapers, including the Wilmington Morning Star, Tarboro Southerner, and Kinston Journal, charged that Perry and other leaders hoped to pack Indiana with African American Republicans before the 1880 presidential election. Many whites also blamed emigrant agents for luring blacks away with false claims. The movement gradually subsided, although some North Carolina blacks continued to migrate to South Carolina, Georgia, and Alabama.

In the second large migration, approximately 50,000 blacks left the state in a 15-month period during 1889-90. The exodus began in March 1889 after passage of the Payne Election Law, which threatened to restrict the voting rights of blacks. It required a prospective voter to give "as near as may be" his age, occupation, place of birth, full name, residence, and township from which he had moved (if applicable). The law gave broad powers to registrars, who could warn an individual to give correct information or allow him to be imprecise-for example, give his initials rather than his full name-and risk being subsequently disqualified. The mortgage and crop lien system, as well as the agricultural recession caused by low cotton prices and short crops, also contributed to the large migration.

The General Assembly of 1891, labeled the "Farmers' Alliance" legislature, passed a law that required an emigrant agent-defined as one who hired blacks for employment outside the state-to purchase an annual license in each county in which the agent operated for $1,000. Violation of the act constituted a misdemeanor punishable by a fine of $500-$5,000 or 4-24 months' imprisonment for each offense. The statute applied only to specified counties. In 1893 the North Carolina Supreme Court declared it unconstitutional on the grounds that an occupation was taxed inconsistently (in some but not all counties). Meanwhile, the out-migration had begun to subside. The exodusters of 1877-80 and 1889-90 moved from rural to rural areas, whereas the mass departures of blacks during the twentieth century were often rural-to-urban migrations.

Exodus to Kansas The 1880 Senate Investigation of the Beginnings of the African American Migration from the South By Damani Davis, National Archives.

Printed advertisements to attract black settlers from the South to Kansas. Image courtesy of Library of Congress. Available from http://www.loc.gov/exhibits/african/images/hofokan.jpg (accessed on August 16, 2012).