Fort Defiance was the home of William Lenoir (1751-1839), Revolutionary War officer, justice of the peace, state 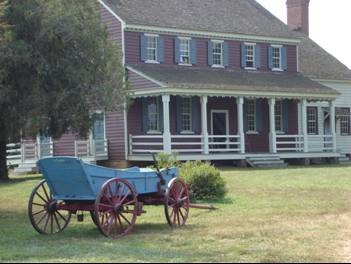 legislator, University of North Carolina trustee, and planter-entrepreneur of Wilkes County (later Caldwell County). Built on the site of a fort once used by British colonists, the two-story frame house was designed by Lenoir and completed in 1790 by local builder Thomas Fields. Located on a 2,000-acre tract south of the Yadkin River, the dwelling measured 40 feet long and 28 feet wide and contained four rooms on each story.

From 1805 to 1880 Fort Defiance served intermittently as a post office. Its postmasters included Edmund Jones (William Lenoir's son-in-law) and Lenoir descendants: Thomas Lenoir, Thomas Isaac Lenoir, and Rufus Theodore Lenoir. William Lenoir enlarged Fort Defiance in 1823 when his son, Thomas, moved into the house with his wife and seven children. William; his wife, Ann; and their unmarried daughter, Mira, occupied the three-room addition.

Including William and Ann Lenoir, seven generations of the Lenoir family made Fort Defiance home. Before William's death in 1839, he distributed more than half of the 2,000-acre tract to his children, who built their own homes on the land. The sociable community of kinfolk near Fort Defiance became known appropriately as "Happy Valley."

By the 1960s, Fort Defiance declined in appearance and in structural maintenance. In 1964 Mildred McDowell Jones, whose husband was a great-great-grandson of William Lenoir, decided to preserve the house as a historic site. With the help of local leaders and the Caldwell County Historical Society, Jones formed the Fort Defiance Project, which raised $15,000 to purchase the dwelling and grounds. In 1965 the project's chairman, Joseph J. Steele, contacted the North Carolina Department of Archives and History (now the Office of Archives and History) in Raleigh for advice.

The restoration of Fort Defiance concluded in 1978, following documentary research by historian Jerry Cashion, acquisition of a $20,000 grant from the state legislature, completion of a successful fund-raising effort, formation of a self-perpetuating board of Fort Defiance, Inc., to oversee the restoration project, and assistance by experts at the Office of Archives and History. It was dedicated later that year as a historic site on the National Register of Historic Places.

Too bad one of the

Too bad one of the descendants who owns property around the historic site (Charley Lenoir) decided to cut down all of his trees - It will take over 100 years to get it back like it was. Landscape quality of the area is greatly diminished - all out of greed to make a few bucks off selling the trees. Go see the site, but don't look too closely because all the trees behind it are gone!