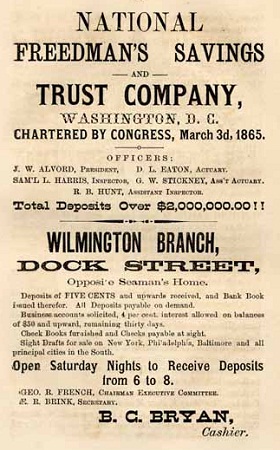 The Freedman's Savings and Trust Company, universally known as the Freedman's Bank, was chartered on 3 Mar. 1865. It grew out of two military savings banks established in Norfolk, Va., and Beaufort, S.C., for black Union troops who needed a place to deposit their wages and bounty money. The company was founded by influential Christian philanthropists, humanitarians, and businessmen who convinced the U.S. Congress that former slaves would learn the values of thrift and savings if they had their own bank.

Three branches of the Freedman's Savings and Trust Company were located in North Carolina. A branch at New Bern opened in January 1866, and Raleigh and Wilmington branches were chartered two years later. Charlotte and Salisbury applied for branches in 1868 but never received them. Of the approximately 8,600 depositors for which records survive, the majority were freedmen. Other depositors included a small number of whites, as well as churches, businesses, and social and charitable clubs.

Although the bank was often associated with the Freedmen's Bureau and the American Missionary Association, it was a separate institution. Eventually it opened 37 branches in 17 states and the District of Columbia. Due to high operating costs and low deposits, the bank struggled from 1865 to 1869. In the hope of reversing this decline, it made an effort to encourage more small depositors and to employ more black cashiers and clerks. In addition, the charter was amended to permit the bank to invest in real estate loans. The latter unfortunately spawned corruption in the bank's central offices. The economic panic of 1873 also took its toll on the viability of the bank, which failed in July 1874. Ultimately, 61,100 depositors received 62 percent of the money they had invested.

"White Man Bery Unsartin" : "Nigger Haint Got No Friends, No How" : The Blackest Chapter in the History of the Republican Party : The Men Who Robbed and Combined to Rob the Freedmen of Their Hard Earnings. Washington:Jos. Shillington, circa 1878. https://archive.org/details/whitemanberyunsa00wash.