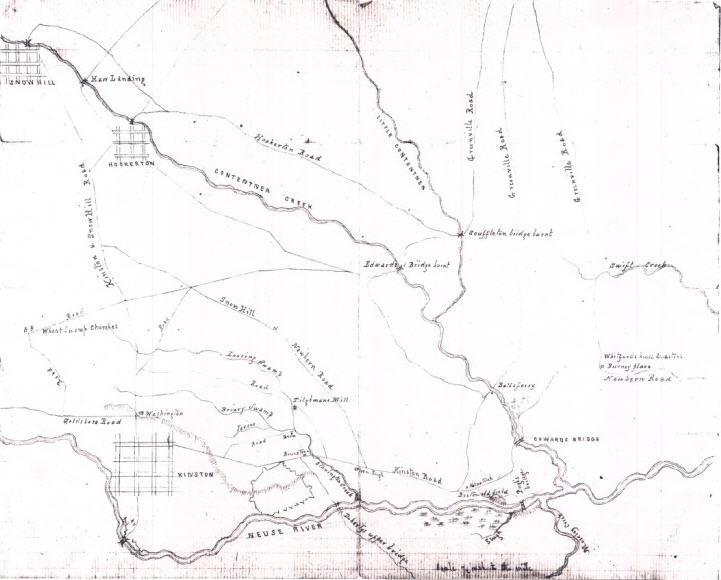 What do Arthur Dobbs, James Glasgow, and Nathanael Greene have in common? Since it was first established as Dobbs County, present-day Greene County has been named for each of these men. Nathanael Greene was a Revolutionary War hero whom the North Carolina legislature sought to honor for his military actions in the state. But who are Arthur Dobbs and James Glasgow, and why was a county named for them only to be changed? Both men served at the highest levels of North Carolina government, with Dobbs as a colonial governor and Glasgow as the first secretary of state. Their service brought them both honor, having a county named after them, and, in the end, dishonor, having the county name changed.

In 1753 King George II appointed Arthur Dobbs (1689–1765) the royal governor of North Carolina. Born in Antrim, Ireland, Dobbs had been a member of the Irish House of  Commons and surveyor general of Ireland. As governor, Dobbs sought to please both the king of England and the colonists. As a result, he often drew heavy criticism from both sides. However, in 1758 the North Carolina General Assembly created Dobbs County by dividing Johnston County. A year later, Governor Dobbs tried to relocate the colony’s capital to his farm in Dobbs County, named Tower Hill. This move was defeated, and Snow Hill, as the place is now known, never became the capital of North Carolina. In 1765 Governor Dobbs, tired of the constant battles with the General Assembly, asked to take a leave of absence from his duties. Although the leave was granted, Dobbs died at his home in Brunswick County before departing for England. The western portion of Dobbs County was split off to form Wayne County in 1779, but Dobbs County continued to exist until 1791.

James Glasgow (ca. 1735–November 17, 1819) was born in Maryland and studied at the College of William and Mary in Virginia. Sometime before 1763, he moved to Kingston (now Kinston), North Carolina, to study law and he was admitted to the bar in Johnston County on July 17, 1764. Glasgow quickly moved into politics. By 1769 he was a regular attendee at the North Carolina General Assembly, often serving as an assistant. In 1771 he obtained his first political office as Dobbs County coroner.

When the Fifth Provincial Congress passed “An Ordinance for appointing a Governor, Council of State, and Secretary, until the next Assembly,” James Glasgow was appointed as the first secretary of state of the new state of Carolina. When the General Assembly met in April 1777, Glasgow again received the nomination for the office he had held since the previous December. On April 18, “by the Unanimous Votes of both Houses,” he was elected “Secretary of State for three years.” He would continue to receive this level of support even in 1797, when charges of misconduct in office first appeared.

The charges surrounded Glasgow’s office’s handling of the issuing of land grants to former soldiers from North Carolina who had served in the Continental Line during the American Revolution. During the war, the Continental Congress had requested nearly 24,000 soldiers from the state. However, service rolls show that North Carolina provided a little over 7,600 men. In 1782, attempting to improve recruitment and to pay existing soldiers, the North Carolina General Assembly set aside land (in present-day Tennessee) and promised it to soldiers, based on their rank and term of service, ranging from 640 acres for a private up to 12,000 acres for a brigadier general. Surviving heirs of soldiers who had died in service were allowed to claim the soldiers’ land.

In 1797 future president Andrew Jackson wrote Samuel Ashe, North Carolina’s governor, with information about deceptive practices taking place in the granting of land to soldiers, including the suspicious activities of Glasgow himself. Although the General Assembly moved quickly to apprehend and try the individuals accused of fraud, it refused to suspend Glasgow from office. For more than a year, the investigation continued, and pressure mounted on the secretary. Finally, in 1798 Glasgow resigned from office to defend himself against his accusers.

Later in 1799, with the phrase “That from and after the passing of this act, the county of Glasgow shall be called and known by the name of Greene County,” the North Carolina General Assembly removed the honor it had bestowed upon James Glasgow eight years before.

During this period in state history, North Carolina did not have a court that had the authority to try the twenty-one men accused of fraudulent activities. In order to try those charged, the General Assembly created a special two-year court that had the power to pass judgment. Trials for three of the accused occurred in June 1800. On Thursday, June 19, Glasgow was found guilty of two charges of misconduct in office and fined £2,000. Willoughby Williams, Glasgow’s son-in-law and deputy secretary of state, and John Bonds were also found guilty and fined £500 and £100, respectively.

At the time of the discovery of the frauds, no man had enjoyed the public’s confidence more fully than Glasgow. So horrified were North Carolina officials in learning of Glasgow’s possible involvement in any sort of fraud that Governor Samuel Ashe purportedly remarked, “An angel has fallen!” By 1805 Glasgow had moved to Tennessee, where he died on November 17, 1819. Additionally, in 1819 the court, which had been created to try those accused in the “Glasgow Land Frauds” and had been continued in existence by the legislature, was made a permanent court: the North Carolina Supreme Court.

In summary, North Carolina citizens received Arthur Dobbs’s arrival as royal governor with great anticipation. When he failed to meet these expectations, he found himself in constant battles with the legislature, and these conflicts ultimately led to his request to leave the colony. James Glasgow rose to prominence during North Carolina’s early statehood. As an early leader, he helped guide the state during its formative years and had widespread support among its citizens. When he was found guilty of misconduct in office, he left North Carolina in shame and lived the rest of his life in obscurity in Tennessee. From Dobbs to Glasgow to Nathanael Greene, each man realized North Carolina’s gratitude by having a county named in his honor. Unlike Dobbs and Glasgow, whose misdeeds brought shame and the removal of their names from the state’s maps, Nathanael Greene maintained his heroic standing. Greene County continues today as a testament to his service to North Carolina.

At the time of this article’s publication, Russell S. Koonts was the director of the Duke University Medical Center Archives in Durham.

Snow Hill, NC was never under

Snow Hill, NC was never under consideration to become the capital of North Carolina. Gov. Dobbs farm, Tower Hill, was located near Kinston in Lenoir County.