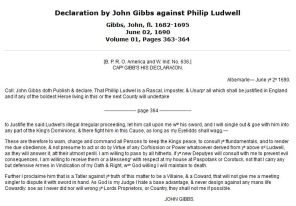 Gibbs's Rebellion in July 1690 was one of several rebellions and attempted coups in North Carolina's turbulent political environment during the Proprietary period. It occurred at the time of King William's War, which was primarily a duel between France and the New England colonies for control of the Upper Hudson River Valley, St. Lawrence River Valley, and Hudson Bay. With the French presence in North America primarily concentrated in Canada and the New England area, North Carolina and the Lower South were spared the ravages of this war. The only serious conflict to affect North Carolina at this time was Gibbs's Rebellion.

Under the Fundamental Constitutions, a governance system established in 1669, the Lords Proprietors created the only American colonial nobility. Using the titles of palatines, landgraves, and caciques, the document allowed a noble to assume the governorship of the colony if neither a governor nor a Proprietor was in residence.

When Governor Seth Sothel was deposed in 1689, Capt. John Gibbs of Pasquotank Precinct, who was related to the late duke of Albemarle and had been a cacique since 1682, claimed the governorship and was accepted. He held at least one Assembly during his tenure. In December 1689 the Lords Proprietors commissioned Col. Philip Ludwell of Virginia as governor of northern Carolina. On Ludwell's arrival in the late spring of 1690, Gibbs challenged his authority and vowed to fight to the death. Having gathered 80 armed supporters, Gibbs descended on a precinct court on 6 July, declared it unauthorized, closed the proceedings, and arrested two magistrates. Ludwell appealed for help to the governor of Virginia, who advised Ludwell and Gibbs to lay their claims before the Proprietors in England. The rebellion was over as soon as the Proprietors chose to support Ludwell. Gibbs apparently did not return to the colony.