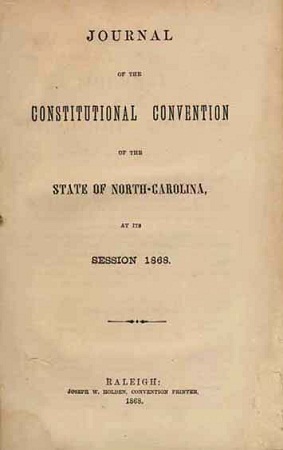 The Convention of 1868 was a direct result of the Radical Congressional Reconstruction Acts passed in 1867 overturning post-Civil War Presidential Reconstruction. Gen. Edward R. S. Canby, commander of the Second Military District of the Carolinas, in compliance with the directives of the U.S. Congress, set the vote for a convention for 19-20 Nov. 1867. The poorly organized Conservative Party did not mount an effective opposition, while the newly formed Republican Party successfully promoted the planned convention. The registration for the election included 106,721 whites and 72,932 blacks. In the first statewide vote involving African Americans, the vote stood at 93,006 for a convention and 32,961 against. Of the 120 delegates elected, 107 were Republicans, including 18 men of northern birth (known as "carpetbaggers") and 15 blacks.

The delegates gathered in Raleigh on 14 Jan. 1868. On the second day of the meeting Calvin J. Cowles, a future son-in-law of Governor William W. Holden, was elected president of the convention. The delegates were overwhelmingly sympathetic to Congressional Reconstruction, even passing a resolution commending Congress for the impeachment proceedings against President Andrew Johnson. In the Conservative press much was made of the fact that the convention cost more than $90,000, making it the most expensive constitutional convention in North Carolina history.

The constitution framed at the 1868 convention and submitted to the people on 21-23 April departed significantly from North Carolina's conservative tradition. Based in large part on the constitution of Ohio and other northern states, it was later viewed as "modern, progressive, liberal, and democratic." The new document abolished slavery, provided for universal male suffrage, eliminated property and religious qualifications for voting and office holding, organized a new superior court system, adopted the northern township-county commission form of local government, and authorized the establishment of a "general and uniform system of Public Schools." The term of the governor was extended to four years. County and executive officers were to be elected by the people, as superior and supreme court justices already were.

The 1868 state constitution was ratified by a vote of 93,086 to 74,016. Conservatives, who referred to the document as the "Canby constitution" or the "black and tan constitution," opposed many of its provisions. Objecting to black suffrage, the lack of property qualifications to vote for state senators, and the direct election of judges and many executive officers, they immediately launched a campaign to repeal or revise the document. Despite their adoption, in an 1875 convention, of many amendments that weakened the constitution's democratic aspects, as well as a number of revisions since then, North Carolina's present constitution retains much of the character and wording of the 1868 document.

Stephen Marc Appell, "The Fight for the Constitutional Convention: The Development of Political Parties in North Carolina during 1867" (M.A. thesis, UNC-Chapel Hill, 1969).

Bernstein, Leonard. "The Participation of Negro Delegates in the Constitutional Convention of 1868 in North Carolina," The Journal of Negro History 34, No. 4, October 1949.