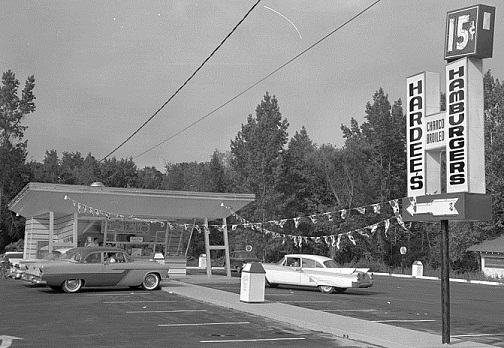 Hardee's restaurants began in Greenville in September 1960, when Wilber Hardee opened a restaurant featuring a limited menu, fast service, and low prices. Hardee had recently visited the McDonald's restaurant in Greensboro (the first McDonald's in the state) and seen how much money could be made selling 15¢ hamburgers and 10¢ french fries. His restaurant was so successful that it caught the entrepreneurial attention of Rocky Mount businessmen Leonard Rawls, an accountant, and Jim Gardner, then an executive with a dairy processing company. Rawls, Gardner, and Hardee, after brief negotiations, formed a corporation, Hardee's Drive-Ins, Inc. Hardee owned one-half of the new company and Rawls and Gardner the other. No money changed hands; Rawls and Gardner agreed to bear the cost of opening a second Hardee's in Rocky Mount. This was as successful as the original Greenville operation, and Rawls and Gardner began making plans to open more restaurants. Hardee did not share his associates' enthusiasm for expansion, and in June 1961 he sold his share of the business to them for $20,000.

In August 1963 Hardee's made its first public stock offering and two years later opened its first restaurant outside the United States. It acquired the 200 outlets of the Sandy's hamburger chain in 1972, the same year that Hardee's stock was first listed on the New York Stock Exchange. Rawls, who located the company's headquarters in Rocky Mount, served as Hardee's first chief executive officer until 1975, by which time the business had changed its name to Hardee's Food Systems, Inc. Gardner left the company in 1966 to pursue a career in politics. Both men had realized from the first that franchising would be the most expeditious way to develop their business. In 1961 they sold their first franchise to Jerry Richardson and Charles Bradshaw, who formed Spartan Food Systems, a firm that eventually came to operate 500 Hardee's outlets in ten states. The second franchise went to the parent company of Boddie-Noell Enterprises, which owned more than 300 Hardee's stores in four states by 2006.

The restaurant firm continued to grow, acquiring the 648 units of the Roy Rogers chain from the Marriott Corporation in 1990. By the early 1990s, with headquarters still in Rocky Mount, Hardee's stood as the third-largest fast-food restaurant company in the world, with annual sales in excess of $4 billion. In 1997 Hardee's became a subsidiary of California-based CKE Restaurants, Inc., which operated more than 3,400 restaurants, including other chains such as Carl's Jr. Headquartered in St. Louis, Hardee's in 2006 operated nearly 2,000 company- and franchise-owned restaurants in 31 states and 11 foreign countries. After several years of lagging sales and financial losses, Hardee's has attempted to revitalize its brand image by remodeling its restaurants into "Star Hardee's," returning to its heritage of charbroiled burgers, and offering new products.

"Hardee's Hamburger advertisement" (photograph). From the The Daily Reflector Image Collection at the Joyner Library of East Carolina University.

What does the sexually

What does the sexually charged ads have to do with selling hamburgers!!!?? What do you think our youth get from these sickening ads? I can promise that as long as these ads are being used, my family and I will no longer patronize any Hardee's restaurant. I'll bet Mr. Hardee is spinning in his grave.
Sincerely
Jean Lockhart and Family

i dont think its that much

i dont think its that much information on here about the history of hardees restaurants.

You can get more information

You can get more information in Wilbur Hardee's autobiography,  The Life and Times of Wilber Hardee: Founder of Hardee's, available online here:  http://books.google.com/books?id=LCQC8qq-OOEC&lpg=PP1&pg=PP1#v=onepage&q&f=false.