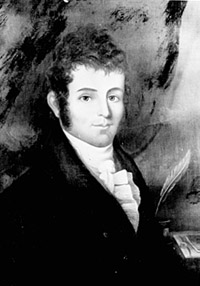 William Hawkins (1777-1819) was governor during the War of 1812. He was born in present-day Vance (then Granville) County on October 20, 1777, being one of twelve children of Philemon Hawkins III and the former Lucy Davis. He attended the College of New Jersey (now Princeton University) and later read law under Judge John Williams. Receiving his law license in 1797, he removed to Fort Hawkins, Georgia, where he worked for two years as assistant Indian agent under his uncle, former United States senator Benjamin Hawkins. In 1801, after returning to North Carolina, he was appointed by Governor James Turner to negotiate a settlement with the remaining Tuscarora Indians of Bertie County. Hawkins’s wife was Anne Swepson Boyd of Mecklenburg County, Virginia, whom he married in 1803. They were the parents of six children.

Hawkins represented Warren County in the lower house of the General Assembly in 1804 and 1805, and subsequently was a representative from Granville County in 1809, 1810, and 1811. During the last two of these legislative sessions he served as speaker. On December 8, 1811, he was elected by his fellow assemblymen to the first of his three terms as governor, the maximum number permitted under the existing constitution.

Because his tenure as governor coincided so closely with the War of 1812, most of Hawkins’ considerable energies and political skills were devoted to military affairs. Soon after taking office, he was called upon to provide 7,000 troops from the ranks of the state militia. Hawkins and the majority of North Carolinians supported the war; but Federalists in the legislature and throughout the state bitterly and persistently opposed it. Moreover, as the war progressed, serious disagreements arose between the state and federal governments with regard to their respective roles and obligations. It was widely felt that North Carolina was providing manpower to other states while its own coastline was virtually defenseless.

In July of 1813 British naval forces under Admiral George Cockburn entered state waters at Ocracoke Inlet and threatened an attack on New Bern. In the face of this emergency, militiamen hastened to the New Bern area from as far away as Raleigh. Hawkins himself conducted a survey of coastal defenses and reported to the legislature on his continuing efforts to secure military assistance from Washington. His third and last term as governor ended only weeks prior to the war’s successful conclusion.

Hawkins returned to private life and to his Pleasant Hill plantation for a period of three years, but he returned to the House of Commons for a final time in 1817. He died in Georgia some two years later, on May 17, 1819, and was buried there in the town of Sparta.

I enjoyed this short piece

I enjoyed this short piece and forwarded it to my brother Maurice M. Floyd that resides in the Hawkin's home with his wife Dianne at Pleasant Hill in Vance county. The home is on the National Register and has been kept as original as possible. Dinners in the dining room are especially a treat when considering the "political" discussions that took place among the leaders in 18th century North Carolina in that very room.