Headache powders, usually mixtures of aspirin and caffeine, are a form of pain reliever extremely popular in North Carolina and other southern states. Local pharmacists originally concocted their own painkilling remedies, buying raw ingredients and creating dosages on demand. They often sold this medicine in powder form because creating pills was more difficult and expensive. Hundreds of local headache powder brands, such as B. D. Mint, Speedo, PDQ, Galax, Stop-Ake, and Wink, had grown out of these recipes by the 1920s and 1930s. 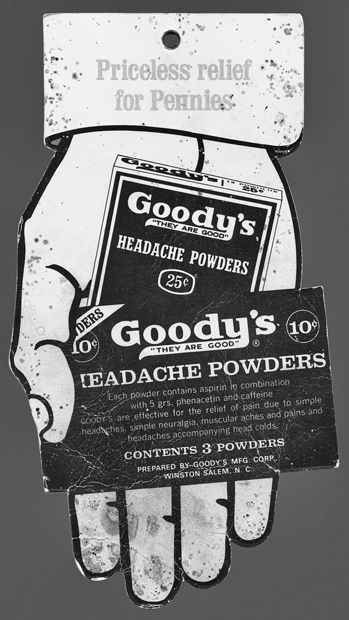 Promotion and advertising played a crucial role in the success of headache powders. Perhaps the most successful form of promotion was the earliest: direct sampling at mill and mine gates, where machinery noise and dust created prime customers for the medicine. As a result, the powders have long been a favorite of southern blue-collar workers. Nicknamed "production powders" by these workers, the remedies were sold on the factory floor from "dope carts," which also carried soft drinks, cigarettes, coffee, and cookies.

The popularity of headache powders increased during the Great Depression, driven by the early use of radio advertisements. Manufacturers have also relied heavily upon point-of-purchase advertising (counter displays), with salesmen carrying the powder out of drugstores and pharmacies and placing it by cash registers in rural service stations and general stores. Headache powder promotion, known for its folksy nature, tied itself to regional pursuits, country music, and sports-especially auto racing and professional baseball.

The three products that came to dominate the headache powder market, B.C., Goody's, and Stanback, all have North Carolina roots. In 1906 Commodore Thomas Council founded B.C. Powders while working in Germain Bernard's Durham drugstore. According to legend, the mixture included crushed aspirin, caffeine, and a secret ingredient from Bernard's not-yet-perfected remedy for sore feet. Durham was then at the start of its tobacco boom, and Council's product was a favorite among the people flocking to work in the factories. In 1910 Council and Bernard named their powder B.C., a combination of their surname initials. They hired their first full-time salesman in 1917, just in time for local doughboys to carry B.C. out of the South. In 1928 B.C. expanded into its own facility. The Block Drug Company of Jersey City, N.J., bought B.C. in 1967 and five years later moved production to Memphis, Tenn.

Pharmacist Thomas M. (Dr. Tom) Stanback created his powder recipe in 1910 while working in a drugstore in Thomasville. Stanback moved to Spencer a year later and began production of his painkiller on a small commercial scale, selling it to workers at that town's railroad repair facility. Although these men spread the fame of Stanback's product along their routes, Stanback's headache powder business remained a sideline to his drugstore until 1924, when he convinced his younger brother Fred to try selling the powder to retail stores. With this beginning of a full-time sales force, Stanback Medicine Company steadily expanded until it occupied a factory in Salisbury in 1931. It remained a family business until 1998, when it was also sold to the Block Drug Company.

Goody's Headache Powder was founded by tobacco and candy wholesaler A. Thad Lewallen in 1932, when he bought Winston-Salem pharmacist Martin C. (Goody) Goodman's pain formula. Lewallen and his first employee, Goodman's former soda jerk Hege Hamilton, set up shop over a bank before moving in 1941 to a renovated clothing factory on Salt Street in Old Salem. Hamilton became president of Goody's in 1945 when Lewallen died. The Lewallen family retained control of the company until December 1995, when the Block Drug Company purchased Goody's. Block soon closed the Winston-Salem facility and moved production to Memphis, Tenn.

Janice Westmoreland, "A Good Sample of How to Build a Business," Wachovia (Fall 1992).