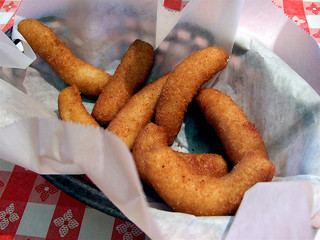 Hush puppies in North Carolina and other southern states are pieces of deep-fried cornbread that may contain egg, leavening, salt, pepper, onion, sugar, or wheat flour. Elsewhere, the term can also signify a cornmeal dumpling, a piece of baked cornbread, a hash patty, white gravy, or a salsa-like relish. Most hush puppies are spheroids formed by dropping a ball of batter into hot fat, but some cooks shape their hush puppies. A popular explanation of how the dish was invented and named is that fishermen in earlier times used hush puppies to quiet their hungry, yelping dogs.

However they originated, hush puppies are a quintessential southern food. The name is English; the main ingredient, native; the method of cooking, West African. Lacking palm oil, slaves and their descendants preserved the ancient tradition of deep-frying by using lard and whatever else was on hand, including surplus cornbread batter. The hush puppy is thus a descendant of the Nigerian acara, made of black-eyed peas, and related to Brazilian acarajé, Caribbean acras, and Creole calas. It is also an ancestor of the large, sweet midwestern corn fritter, which often contains kernels of corn and is sometimes served with condiments such as blueberry syrup. Hush puppies are usually served with fried seafood and are a typical accompaniment to barbecue and Brunswick stew.

the origins of the name hush

the origins of the name hush puppy, i have been told they were invented to hush the tracking dogs used to track escaping enslaved Africans. any truth t this?

According to my Louisiana

According to my Louisiana grandmother, hush puppies had an interesting origin. Slaves planning an escape to freedom in the wee hours of the night would mix a concoction of cornmeal, milk, eggs and okra which was fried in hot lard. These balls were fed to the slavemasters’ dogs as a means to quieten them. Hence, the term “hush puppies”was born.