The Impending Crisis of the South 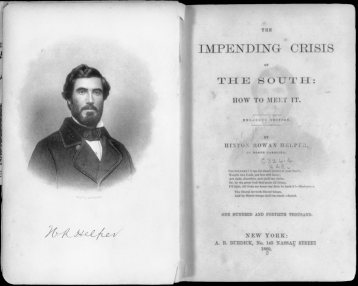 The Impending Crisis of the South, by Rowan County born abolitionist Hinton Rowan Helper (1829-1909), was published by A. B. Burdick of New York in 1857. The book, along with Harriet Beecher Stowe's Uncle Tom's Cabin (1852), stands out as one of the most significant antislavery works preceding the American Civil War. The publication aroused little notice until 1858, when New York editor Horace Greeley undertook publication of an abbreviated compendium, for which he solicited a number of Republican endorsements. In 1859 the Republicans attempted to elect John Sherman, an endorser of the Helper book, as Speaker of the U.S. House of Representatives. After a lengthy and violent debate, during which the book gained significant notoriety, southern representatives managed to defeat Sherman's election.

Helper's Impending Crisis compared the South unfavorably with the North by selective use of the censuses of 1790 and 1850. Helper had been careless with statistics before in his California Land of Gold: Reality vs. Fiction (1855). Impending Crisis aroused even more concern, however, because of its intemperate attacks on the planter class. In fact, Helper's book was so virulent that it had taken him several months to find a publisher. The work urged class agitation against slavery or, failing that, the violent overthrow of the slave system by poorer whites. Helper concluded that slaves would join with nonslaveholders because "the negroes . . . in nine cases out of ten, would be delighted with the opportunity to cut their masters' throat." Despite his abolitionist sentiment, Helper sympathized far more with poor whites and capitalists than with blacks. A racist to the core, he advocated white supremacy.

Helper could not return to North Carolina after the publication of his book, which became an official Republican campaign document. Impending Crisis was banned throughout the South, and a number of people were arrested for possessing the volume. Helper's opposition to slavery has been explained by such factors as his German background and his own lack of success in a slave state. Whatever the cause, he produced the most important nonfictional antislavery book ever written.

Helper, Hinton Rowan. The Impending Crisis of the South: How to Meet It. New York: Burdick Brothers. 1857. https://archive.org/stream/impendingcrisiso01help#page/n5/mode/2up (accessed August 28, 2012).

Title page and frontispiece portrait of Hinton Rowan Helper in the 1860 edition of The Impending Crisis of the South. North Carolina Collection, University of North Carolina at Chapel Hill Library.