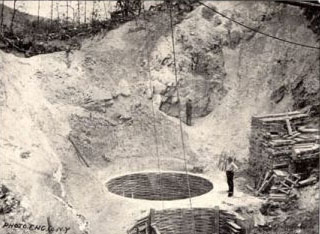 Kaolin is a fine clay mineral used in ceramics and insulators. The Cherokee Nation was issued a patent in 1744 for the production of porcelain from a mixture of kaolin, quartz, and feldspar. In 1767 Thomas Griffiths had five tons of kaolin dug and transported to England from the Cowee section of modern Macon County for use by the Wedgwood potters in making fine medallions. Systematic mining began in 1888 near Webster in Jackson County, and by 1900 North Carolina had become a significant producer with tonnage sent to Trenton, N.J. Kaolin has continued to be an important product of North Carolina mining.

Catalogue of the North Carolina exhibit at the American Exposition at Boston, 1883, North Carolina Department of Cultural Resources Digital Collections

Public laws and resolutions of the State of North Carolina passed by the General Assembly at its session of...[1917], North Carolina Department of Cultural Resources Digital Collections