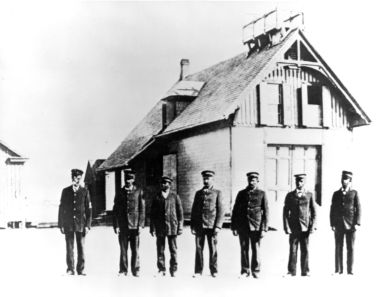 Established as a federal agency in 1872 and operating in North Carolina by 1874, the U.S. Lifesaving Service (USLSS) was an integral part of coastal life in North Carolina, as it was elsewhere in the nation. Originally an arm of the U.S. Treasury Department, the USLSS was combined with the Revenue Cutter Service in 1915 to form the U.S. Coast Guard.

As originally conceived, the USLSS operated out of a series of stations, each constructed within view of the waters offshore. The stations were to be manned from late spring to early fall, when hurricanes threatened and commercial sea traffic was at its busiest. A keeper and a crew of six lifesavers served at each station. After the wreck of the USS Huron in 1877, the lifesaving season was extended, and keepers eventually became year-round federal employees. The crews remained seasonal, although they could be called up for emergencies out of season. By the founding of the Coast Guard, stations were manned year-round. In North Carolina, the service began with the construction of seven stations-at Jones Hill, Caffeys Inlet, Kitty Hawk, Nags Head, Bodie Island, Chicamacomico, and Little Kinnakeet-starting in 1874. Eventually a total of 29 stations created a chain of vigilance along the coast. Each station's crew was responsible for patrolling a stretch of beach in search of grounded or foundering vessels. This patrol was conducted on foot in all weather conditions. 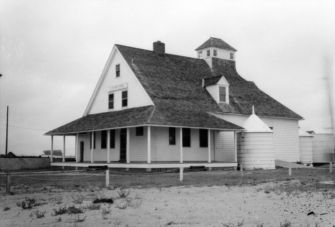 From the 1870s to World War I, the USLSS on the Outer Banks in particular performed many rescues. The Pea Island Station under Capt. Richard Etheridge, for instance, was manned by the only all-black crew in North Carolina; despite racial prejudice and segregation, the men served heroically in many rescue operations. The captain and crew of the Chicamacomico station distinguished themselves in the rescue of the crew of the Mirlo, a British tanker torpedoed off Hatteras Island in 1918.

Rescue operations were extremely hazardous and required regular drill training. At first, crews rowed a small dory through crashing waves and high seas to the site of a wreck as many times as necessary to carry survivors to safety. After 1878 the use of the Lyle gun-a small cannon positioned on the beach that fired the breeches buoy (in which survivors sat with their legs dangling through the buoy as though they were wearing a pair of breeches)-made rescues safer. Using a secured line, the breeches buoy carried survivors to shore one at a time. By the early twentieth century, motor-driven boats had become more common at lifesaving stations. The modern Coast Guard serves as the legacy of the lifesaving captains and crews of earlier days.

Finding Aid of the Lifesaving Stations of the Outer Banks Collection, NCDCR, 1874 - 1988: http://www.obhistorycenter.ncdcr.gov/ead/obhc_lifesaving_stations_outer_banks.xml