I had been hearing about Ben Averett's annual Brunswick stew for years. Every October since 1967, Averett has scrubbed out a 25-gallon black iron wash pot, built a hardwood fire under it and prepared an old-fashioned stew for a crowd of friends and family in Oxford. After supper, he and his guests break out fiddles and guitars and play old-time music half the night. There is a rumor about some kind of autumnal tonic -nothing to that, I am sure.

Brunswick stew is a cherished dish in our tobacco belt, and Averett takes great pride in making stew just like his elders. For him the real thing means more than just good stew. His stew stands for the way he believes a life should be lived: no shortcuts, no compromises and finding a fulsome joy at the good things in life, not least among them, a bowl of homemade stew on a crisp fall night.

Here Averett discusses the history of Brunswick stew and shares his recipe - for those of you who want to do things right. 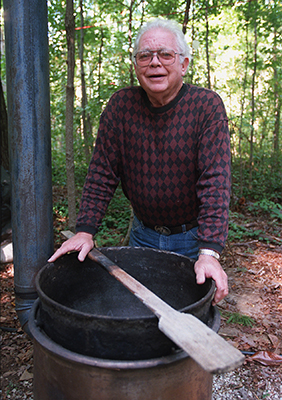 I want to thank Anna Fink and her father, Dr. Leon Fink, for their help with my interview last month. Dr. Fink generously shared with me an earlier interview he did with Mrs. Galvez, and Anna did a magnificent job as my translator.

Seward, Chris. "Ben Averett."  Photograph. 1999. To request permission for further use or to purchase a print, please contact the News & Observer.