Betty Ballew: The Place I Love Best On This Earth

Betty Ballew grew up in one of the most beautiful valleys by the Blue Ridge Parkway: the North Fork, just north of Black Mountain. Earlier this century, thousands of Appalachian families were displaced to make way for reservoirs, hydroelectric projects, and national parks and forests.

Ballew was among the dispossessed. She lost her home in 1954, when Asheville dammed North Fork creek to create a reservoir to supply the city with drinking water.

Recently, University of North Carolina at Chapel Hill historian Kathy Newfont and I visited Betty Ballew at her home in Burnsville. As she told us, the reservoir flooded her family's farm, but at least an old forest still covered the hills and mountainsides. Then, in 1987, she looked toward the North Fork Valley and saw a gaping muddy scar of clear-cut land. "It broke my heart, " she said. The city of Asheville was allowing a timber company to clear-cut her former home.

As a member of Citizens Against Clearcutting the Asheville Watershed (CACAW), Ballew helped lead a grass-roots campaign to save the North Fork. It was a long, arduous struggle against city officials and the timber industry, but ultimately CACAW did halt the clear-cutting. Many CACAW members opposed the clear-cutting because it would have polluted the water supply and destroyed a scenic forest. Mrs. Ballew's feelings ran deeper. 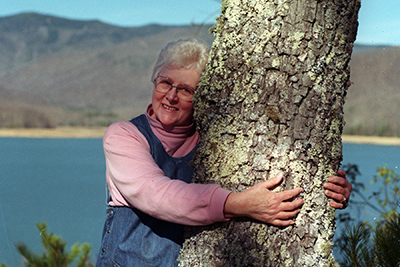 Seward, Chris. "Betty Ballew."  Photograph. 1999. To request permission for further use or to purchase a print, please contact the News & Observer.

I want to know more about

I want to know more about Betty Ballew.