I spoke with Hattie Brown as we walked through the old graveyard in Goshen, a black farming community in Jones County. She had a story for each of the dead. Her most striking memories were her grandmother's stories of slavery days. The first time I met her, we talked for an hour and her remembrances still had not reached the Civil War.

Slaves could not legally read or write, but they preserved their history in song, sermon and saying. Brown attests to the enduring power of that oral tradition. Now 70 years old, a tobacco farmer most her life, she has never forgotten the stories of slavery told by her grandmother, Luvenia Smith Loftin.

She began her account by telling me about Luvenia's father, a slave rebel named Luke Smith. 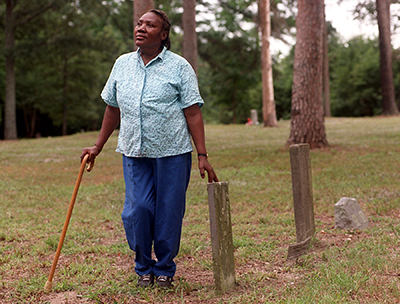 Seward, Chris. "Hattie Brown."  Photograph. 1998. To request permission for further use or to purchase a print, please contact the News & Observer.