The great fire of 1922 burned 40 city blocks in New Bern and left thousands of people homeless. It was the most destructive fire in the state's history. Dorcas E. Carter, one of the few people who can still recall the blaze, was 8 years old when the flames reduced her neighborhood to ashes. It had been one of the most prosperous black communities in the South. I interviewed her at her home, where she was surrounded by photographs of her family, including a grandmother who had been a fisher-woman on Portsmouth Island, one of the Outer Banks.

Hers has been a life of triumph against many hardships. Born in New Bern in 1913, Miss Carter said that the fire was the turning point in her life. Since then, "it looks like it has been one struggle after another, " she said. Despite all the hard times, she became a legendary teacher in the local public schools, bringing wisdom, charity, and dauntingly high expectations to her students for 39 years.

Above all, she gave her students the example of her own deep faith and unshakable will. "I would ask God, don't move the mountain, just give me the strength to climb it, " she told me. 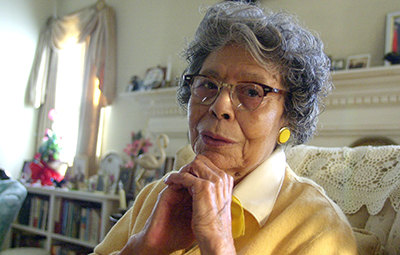 David Cecelski is the Whichard Distinguished Visiting Professor in the Humanities at East Carolina University.

Seward, Chris. "Dorcas E. Carter."  Photograph. 2001. To request permission for further use or to purchase a print, please contact the News & Observer.