Marta Galvez: We Can Outlast

I talked with Marta Galvez at her home in Morganton, a small city in the foothills of the Blue Ridge Mountains. I remembered Morganton as a quiet furniture-making town, the sort of place that didn't seem to have much traffic with the outside world.

That day I discovered a different Morganton. I heard a marimba beat coming from a laundromat jukebox and the rhythms of Mayan languages in the streets. And I saw women dressed in huipiles, the breathtakingly colorful handmade blouses worn by the indigenous people of Guatemala.

Senora Galvez introduced me to the history of this Guatemalan community. At the center of her story, I found Case Farms, a poultry slaughterhouse that first recruited Guatemalans to Morganton. The company offered her countrymen a welcome asylum from a brutal civil war but also led them into confrontation with a poultry industry notorious for its toll on body and spirit.

Galvez was among the Guatemalan leaders who showed great courage in demanding reforms through a union organizing campaign at Case Farms. Her words revealed a proud heritage of resistance when faced with hardship and injustice. It is a part of the Guatemalan people's history, and now it is also a part of North Carolina history. 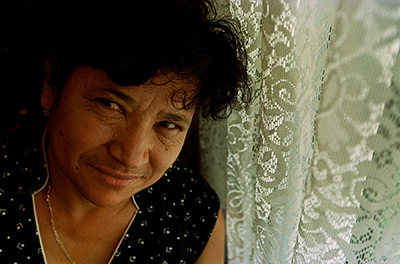 Seward, Chris. "Marta Galvez."  Photograph. 1999. To request permission for further use or to purchase a print, please contact the News & Observer.