by Carole Watterson Troxler and David A. Norris, 2006 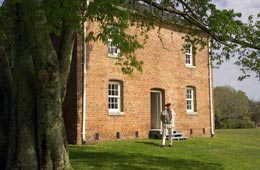 Between the destruction of the Tory, or Loyalist, forces at Moore's Creek Bridge on 27 Feb. 1776 and the arrival of the British army of Lord Charles Cornwallis in September 1780, there was only scattered overt Tory resistance to the revolutionary government of North Carolina. One exception during those years was a clandestine plot known as the Llewelyn Conspiracy (also called the "Gourd Patch Affair" or "Tory Plot"), which involved a group of people opposed to the American cause on the grounds that Anglican dominance of North Carolina's affairs would be undermined in a revolution. The conspirators knew that the 1776 state constitution removed the privileges that the Anglican Church had held as the colony's established church. Further, in their distrust of the revolutionaries' intentions, they thought that an alliance with France would result in the imposition of Catholicism and the destruction of Protestant congregations throughout the colonies. The conspirators had also heard about the deistic position of some revolutionary leaders and questioned their intentions regarding Christianity in general.

The central figure in the conspiracy was John Llewelyn, a Martin County planter and justice of the peace. By March 1777 Llewelyn, his son William, and James Rawlins, an Anglican lay reader, had written a "constitution" (now lost) that outlined the aims of their organization and had begun looking for recruits to join their underground group. Most of the plotters planned to aid deserters and draft resisters, secretly obtain and store small amounts of gunpowder and lead, and wait to join the British troops that were sure to reach North Carolina in good time. Llewelyn himself had a more ambitious, and violent, agenda. He planned the assassinations of prominent Whig leaders in the region, including several acquaintances, and wanted to make a raid on Halifax to capture Governor Richard Caswell and the state magazine. To draw American troops away from Halifax, he intended to spark a slave revolt with the aid of a Loyalist slave patroller.

Instead, on 4 June 1777, the slave patroller gave revolutionary leaders important, if incomplete, information about Llewelyn's plans that seems to have provided their first knowledge of the conspiracy. Two weeks later another conspirator, William May Jr., came forth with more information, naming William Tyler, who was arrested the next day carrying papers regarding the more violent plans. That night at the gourd patch, Llewelyn's group laid plans to free May and Tyler from jail using powder they had obtained from Daniel Southerland, a Loyalist merchant in Tarboro.

In July about 30 conspirators were caught and disarmed while attempting to attack Tarboro and release May from jail. This failure was the high-water mark of the conspiracy. Most of the other known conspirators were arrested or gave themselves up. In all, about 90 people were implicated in the plot, most of whom were from Martin, Tyrrell, Hyde, Edgecombe, or Bertie Counties.

In the trials at Edenton, the revolutionary government was lenient with the conspirators. Most of them made depositions to the court, agreed to take the state loyalty oath and submit to militia service, and were never charged with a crime. Charges were dropped against most of the 18 who were tried. But Llewelyn was convicted of treason in September 1777 and sentenced to be hanged. Numerous requests for clemency came from friends, relatives, and even the presiding judge in his trial. Governor Caswell later pardoned him, and Llewelyn lived peacefully until his death in 1794.