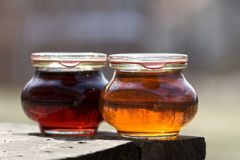 Maple syrup and maple sugar, usually associated with Vermont and other parts of New England, began to be produced by Moravian settlers in Piedmont North Carolina soon after they arrived in the region. A daily journal for 3 Jan. 1754 recorded that the settlers boiled sap from maple trees (Acer saccharum) growing around them to make syrup. Ten years later, they noted that the sap was "so sweet that some sugar can be boiled from it, and so plentiful that some use it for a drink at the time it is rising. It flows best on clear, cool nights in spring." Early settlers discovered the Indians using maple sap in this manner.