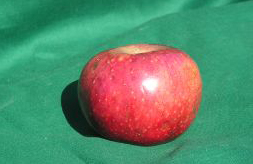 Mattamuskeet apples are named for Lake Mattamuskeet, in North Carolina's coastal Hyde County, where the apples originated. Ranging from medium to large in size, the apples have a yellow flesh covered by a rusty red peel coated with white dots. They are hard when first picked, but after being stored in a dry place they become mellow while retaining their firmness. The apples are noted for their ability to remain fresh for a long period and are good for cooking. Their shape differs from other apples in that the apple tends to be slightly flattened when sitting on the stem end. Legend tells that the seeds for the first Mattamuskeet apple trees were brought to the area in the gizzard of a goose. Hyde County old-timers call them "Skeet apples." A small number of Mattamuskeet apple trees existed in 2006, especially on the old plantation homesteads.

The Octagon House in Hyde

The Octagon House in Hyde County has a small orchard of them growing next to the house.