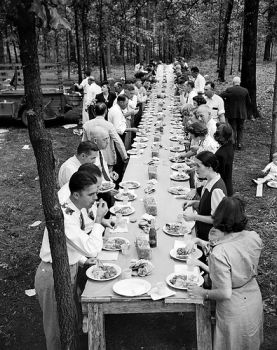 Mealtimes in North Carolina were long set to accommodate those engaged in manual labor, particularly field workers in planting and harvesting. Farms and plantations generally had a large bell mounted on a tall post; it would be rung before meals and in case of emergencies. The first meal of the day was called breakfast, as it broke the night's fast. The principal meal of the day, eaten about midday, was called dinner. On 15 Mar. 1779, the Moravians at Salem, for example, noted that a woodshed fell under a heavy snow just as the sisters were sitting down to dinner at noon. The name dinner occasionally was dropped in favor of lunch or luncheon by mid-twentieth century. Yet when the Marquis de Lafayette, for whom Fayetteville was named, visited the town in 1825, the banquet served at 3 p.m. was called dinner. The evening meal was supper, and it was usually served long enough before dark to permit work in the kitchen to be completed while it was still light.

The ritual of taking tea in the afternoon was never widely adopted in North Carolina, although there are accounts of special occasions on which it was served. When Governor and Mrs. William Tryon visited the Moravians at Bethabara in September 1767, they had afternoon tea. Tea parties were mentioned in letters in the nineteenth century, and a Confederate soldier at home on leave during the Civil War appreciated the tea and cake served by the belles of his neighborhood.

Following the practice of the New England states, some North Carolinians, and other southerners of the fashionable or professional classes, began to drop the word dinner for their midday meal and speak of "lunch," or on a more formal occasion, of "luncheon." While the main meal was still called dinner, it was served at the end of the day. Many people, nevertheless, still stick to the accustomed name and hour for dinner even into the twenty-first century, sometimes simply as a matter of pride in their heritage.