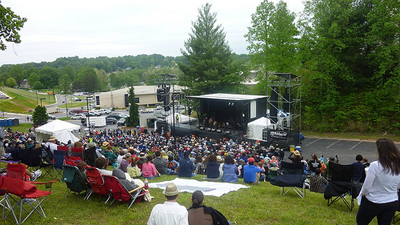 MerleFest, a huge American roots and folk music festival that yearly draws nearly 80,000 people to Wilkes Community College and its surrounding area, stands as a musical homage to its namesake, the late Merle Watson (son of legendary musician and Deep Gap native Arthel "Doc" Watson). MerleFest's lineup of more than 100 diverse musicians performing on the festival's 13 stages provided a boost to the regional economy in excess of $15 million in 2004.

With the assistance of Ralph Rinzler, the first MerleFest took place in late April 1988, touting a relatively small number of acoustic artists playing on stage in Wilkes Community College's John A. Walker Center and on the deck of two flatbed trucks to a crowd of 4,000 people. The idea behind the festival was for musicians, with the help of the Watson family, to converge and celebrate the life of Merle, who died in 1985, through music. Over the years, guest performers have included Mary Chapin Carpenter, Natalie McMaster, Earl Scruggs, Alison Krauss, Willie Nelson, and others.

In the early 1990s, North Carolina Public Television created an eight-part series, Pickin' for Merle, which showcased numerous acts over MerleFest's four-day span. The series has been shown on public television stations nationwide. MerleFest continues to grow in popularity, adding stages and performers and constantly shifting its artistic influences. Regardless of changes, the festival remains committed to two things: promoting true "Americana" music by celebrating the lives of Doc and Merle Watson and supporting the numerous facets of the Wilkesboro community through fund-raising.