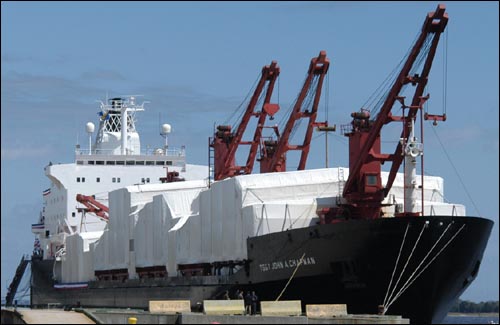 The Military Ocean Terminal at Sunny Point is situated on the west bank of the Cape Fear River, 26 miles south of Wilmington, in Brunswick County. It occupies approximately 8,500 acres between the ruins of the Brunswick Town State Historic Site and Walden Creek. Built in 1951, the terminal serves as a transfer point between rail cars, trucks, and ships during the import or export of weapons, ammunition, explosives, tanks, and military equipment for the U.S. Army. As the world's largest military terminal, Sunny Point ships more explosive cargo and equipment to the nation's armed forces and allies than any other facility.

The terminal was located in Brunswick County because of its proximity to rail, highway, and sea traffic and because it was isolated, tree-covered, and uninhabited. Governor George Burrington built the earliest plantation on the property in 1725. It became known as Snow's Point when rice planter Robert Snow acquired the property in the 1750s. During the Civil War the area was the site of a minor battery in the Cape Fear defense system, and a locally run saltworks. Around the turn of the twentieth century, the name "Reaves Point" was changed to "Sunny Point." By the 1950s the land was agricultural and contained few structures. It was considered an ideal location for ammunition storage and exchange.

Despite its isolation, Sunny Point is an impressive facility. Its three huge docks or concrete wharves can handle several ships at one time. Large cranes and a massive railroad system with 62 miles of tracks within the terminal move military supplies and explosive cargo. During the Vietnam War (1957-75) Sunny Point bristled with activity, loading as many as six ships at once with armaments. More than 466,000 measured tons of cargo used in the Persian Gulf War (1991) passed through the port.

In the early 2000s security at Sunny Point was tight. Visitors entered by appointment and were asked to surrender any matches or lighters. Safety was emphasized. Plexiglas was used instead of glass in all buildings to eliminate the scattering of glass fragments during accidental explosions, and cargo waiting to be loaded into ships was temporarily stored between earthen barricades to localize such incidents. To prevent harm to the surrounding community, there was a 2,100-acre buffer zone on Pleasure Island (Carolina, Kure, Wilmington, and Fort Fisher Beaches) and a 4,300-acre buffer in Brunswick County. The two most controversial cargoes shipped through the terminal were World War II nerve gas in 1970 and European spent nuclear fuel rods in 1994.

Is it possible to get a

I am a retired Senior NCO,

I am a retired Senior NCO, USAF and my wife's dependent ID card has expired. Does Sunny Point still have a ID card facility? If so, is there a number to call for an
appointmemnt. Thank You

I suggest this site. https:/

I suggest this site. https://militarybases.com/north-carolina/motsp/ Note that we are a library rather than part of the military. Hopefully you can find your answer there.

My name is Stacey Bullard,

My name is Stacey Bullard, and I'm the daughter of Colonel Charles N. Bullard, US ARMY, (Ret). He was the commander at Sunny Point from 1987-1989, and we lived on Ft. Johnston, in the Garrison House. It was amazing, and I miss Southport tremendously. I graduated from South Brunswick High in 1989.