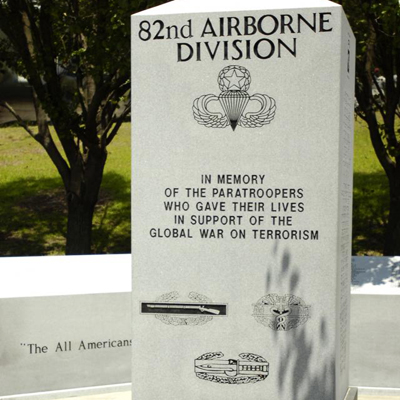 82nd Airborne Paratroopers Global War on Terrorism Memorial
Fort Bragg
View complete article and references at Commemorative Landscapes of North Carolina at: https://docsouth.unc.edu/commland/monument/389
Description: This granite memorial honors the service of the members of 82nd Airborne Division paratroopers who sacrificed their lives in the global war on terrorism. The memorial is composed of a wide smooth obelisk of light granite, approximately 11 to 12 feet high and weighing 13 tons, resting on a two tier granite base. The four sides are inscribed, the front with a general commemoration and the sides with the names of service personnel. The commemorative site has expanded to include a low granite wall behind the obelisk to include the names of additional service personnel as time goes on. The front face of the column also includes the inscribed images of four of the insignia of the 82nd Airborne.
Inscription:
Front: 82nd AIRBORNE / DIVISION / IN MEMORY / OF THE PARATROOPERS / WHO GAVE THEIR LIVES / IN SUPPORT OF THE / GLOBAL WAR ON TERRORISM
Dedication date: The obelisk was installed sometime after the beginning of the military efforts in Afghanistan and Iraq following the September 11, 2001 attacks. The expanded memorial with the addition of the wall was dedicated in May 2008.
Materials & Techniques: Granite
Sponsor: The expansion of the memorial was made possible by a fundraising campaign led by retired sergeants majors and officers.
Post dedication use: Ceremonies have been held each year at the site since its installation. The site has become solemn ground for the families of those serving and who have lost their lives in military service.
Subject notes: The 82nd Airborne Memorial demonstrates the changing nature of the commemorative landscape and the need for expansion of existing sites to honor soldiers lost in ongoing global military efforts. The last name added to the obelisk -- Sgt. Clayton Dunn -- was added when the soldier was killed in a roadside bomb attack in Iraq in May of 2007. Some 5,000 soldiers have lost their lives in Iraq and Afghanistan since the beginning of the global war on terrorism effort. Other military commemorations around the country have encountered the same need to expand their sites to allow for ongoing commemorations.
Location: The marker is located in the memorial garden area outside the 82nd Airborne Museum on Ardennes Road.
City: Fort Bragg
County: Cumberland
Subjects: Iraq War, 2003-2011,Operation Enduring Freedom,Veterans of Multiple Wars
Latitude:
35.13003
Longitude:
-79.02229
Subjects:
Monuments
Places
Authors:
Commemorative Landscapes of North Carolina
Origin - location:
Cumberland County
Fort Bragg
From:
Commemorative Landscapes of NC, University of North Carolina Chapel Hill.