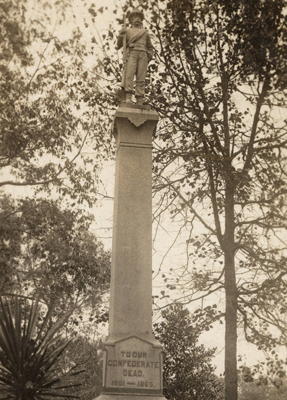 Confederate Monument to the Private Soldier
Washington
View complete article and references at Commemorative Landscapes of North Carolina at: https://docsouth.unc.edu/commland/monument/235
Description: The monument depicts a Confederate soldier at parade rest. The statue rests atop a tall, tapered column of smooth granite. The column is mounted on a two tier base of smooth granite resting on a brick platform. The base of the column bears the inscription which is offset by a darker stone border. A single cannon sits to the left of the front, its barrel facing away from the monument. Two cannon barrels are mounted on the mound in front of the statue facing upward and away from the monument.
Nickname: The Washington Grays
Inscription:
TO OUR / CONFEDERATE / DEAD. / 1861-1865.
Dedication date: May 10, 1898
Creator: Charles M. Walsh, Builder Marble and Granite Works, Builder
Materials & Techniques: Bronz, granite, brick
Sponsor: The Ladies Memorial Association of Beaufort County
Unveiling & Dedication: Colonel Julian Shakespeare Carr of Durham delivered the address at the dedication. The day began with decoration of the graves, followed by a procession from the Town Hall to the monument. The Chief Marshal was Colonel Frank M. Parker of Enfield, and the march included the Washington Coronet Band, former soldiers marching with their units, the Ladies Memorial Association and the United Daughters of the Confederacy, the Children of the Confederacy, public school children, and citizens. Orations were given by Mary Kathleen Bogart "To the Private Soldier" and by Annie T. Bragaw "To the Lost Cause" at the unveiling and dedication. The band played, and the ground around the monument was decorated by the Children of the Confederacy. The ceremony ended with a return march to the Town Hall and was followed by a banquet for the veterans.
Post dedication use: The monument has been the site of annual commemoration services.
Subject notes: According to the Washington Grays Chapter of the United Daughters of the Confederacy, Beaufort County sent ten companies to the Confederate Army, and seventeen soldiers were killed in the defense of Washington.
Location: The monument sits in Oakdale Cemetery atop a grassy mound and next to a road in the cemetery.
Landscape: The monument sits atop a grassy mound, surrounded by grave markers. Cannon are mounted in the earth in front of the monument, with their barrels facing away from the soldier. This section of the cemetery is bordered by mature trees.
City: Washington
County: Beaufort
Subjects: Civil War
Latitude:
35.55648
Longitude:
-77.04404
Subjects:
Monuments
Places
Authors:
Commemorative Landscapes of North Carolina
Origin - location:
Beaufort County
Washington
From:
Commemorative Landscapes of NC, University of North Carolina Chapel Hill.