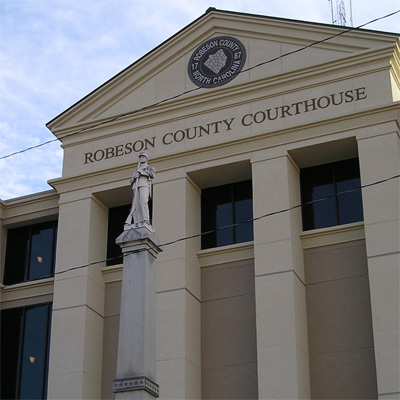 Description: This colossal monument consists of a tapered pedestal upon which stands a uniformed Confederate soldier holding his gun in a resting position. The pedestal itself contains several inscriptions and images. There are crossed sabers carved onto the north side of the foundation, while the western side that faces the street displays mounted cannons. Above the base is an inscribed image of the Confederate flag.


North face:
1861 / THIS MARBLE MINSTREL'S VOICELESS STONE /
IN DEATHLESS SONG SHALL TELL, / WHEN MANY A VANISHED AGE HATH FLOWN /
THE STORY OF HOW THEY FELL. / ON FAME'S ETERNAL CAMPING GROUND, /
THEIR SILENT TENTS ARE SPREAD, / AND GLORY GUARDS WITH SOLEMN ROUND /
THE BIVOUAC OF THE DEAD.


South face: ERECTED UNDER THE AUSPICES OF / THE UNITED DAUGHTERS OF THE CONFEDERACY / IN LOVING MEMORY OF THE TWO THOUSAND /
CONFEDERATE SOLDIERS OF ROBESON COUNTY

Sponsor: The United Daughters of the Confederacy

Cost: $Money was raised by subscription with frequent reports within the local papers of who had donated. Donors promised at least $2774.81 to fund the monument. At least $1918 of these subscriptions were actually collected.

Unveiling & Dedication: The monument was still missing the statue, which had not arrived yet, that tops the monument for the dedication ceremony on Confederate Memorial Day (May 10) in 1907. It was latter added to the base. Governor Glenn gave a speech at the dedication and the crowd was estimated at 7000 people.

Subject notes: Dedicated to the Confederate soldiers of Robeson County.

Landscape: Located in front of the County Courthouse on Elm Street facing west.

IF we are going to remove

IF we are going to remove images of hatred and bigotry, as a NATIVE AMERICAN I suggest we remove the image of Andrew Jackson "the hero of Donald trump" from our currency, we NATIVES must look at daily. And all statues of him replaced with one of the women,elders,and children massacred in the trail of tears. Yes history has a place in this country but not ONLY the history of prejudice bigots."