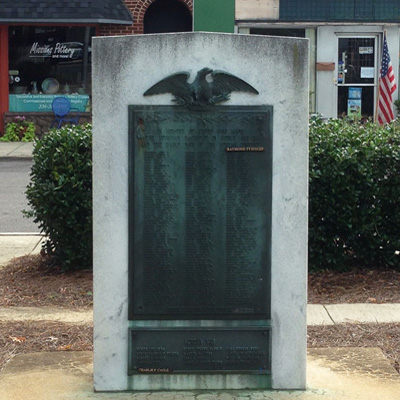 Inscription:
Top plaque: IN MEMORY OF THOSE WHO MADE / THE SUPREME SACRIFICE IN WORLD WAR II / AND THE EARLY DAYS OF THE KOREAN CONFLICT / [Three long columns of names follow.]
Erected by the Joint Veterans Committee /
American Legion, V.F.W., AmVets and D.A.V.

Post dedication use: On Sunday May 29th, 2011 the Davidson County Veterans Council's hosted the 66th Annual Davidson County Veterans Memorial Service at the Memorial. Two names were added to the monument of military personnel: Josh T. Harris and Charlie F. Cagle. Harris died in Afghanistan in 2008. Cagle had died in the Korean War, and his body was only recently found.