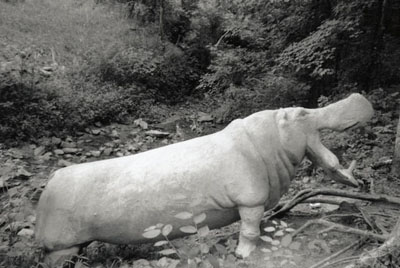 Description: For 13 years (1982-1995), this full-scale cement sculpture of a hippopotamus was located in the Mill Creek branch off Bolinwood Drive in Chapel Hill. Local children frequently played on it. In June of 1995 the Hippo disappeared suddenly. See controversies for details about the great hippo kidnapping.

Dedication date: No dedication but it was placed in the creek in 1982.

Unveiling & Dedication: No dedication was held. Mr. Barrett simply placed the sculpture in its location.

Post dedication use: In 1995 a proposal was put forward for a gun sculpture as a memorial for victims of gun violence. A letter to the editor published in the Chapel Hill Hearald suggested that a new Hippo, that children could play on, would be a better use of the funds.

Subject notes: Gerry Barrett commissioned the hippo in honor of the stories his father told him as a child. As Barrett told the Chapel Hill Herald, "As a little kid, my dad made up a story about a magic hippo that rode in the trunk of our car. It wandered down to Morgan Creek. The hippo was the subject of bedtime stories for a number of years."

Controversies: In June of 1995 the Hippo disappeared suddenly. Local newspapers sought information and Realtor Eunice Brock offered $200 for information leading to its location. Reports came in of people seeing it moving in different areas of the county but the information did not lead to the Hippo. Shortly thereafter a photograph was delivered to the Chapel Hill Herald. The image was of a masked man holding a jack hammer to the cement Hippo's head. A caption read: "Back off or the Hippo buys it." Eventually a police officer found the statue in Chatham county and the truth was revealed.


Due to ongoing development in the original location, the man who commissioned the statue in 1982, Gerry Barrett, had relocated the hippo to his back yard in Chatham County. Barrett later explained to the Chapel Hill Herald, "The hippo called and had a couple of concerns. One concern was a crew of workmen on the premises cutting down all the shrubs and bushes. Four styles of homes and a horrendous road were being built. She felt it was time to move to a more tranquil setting."


It was suggested the Hippo be relocated Umstead Park near Bolin Creek, but Gerry Barrett decided to keep it at his home. A dispute arose over who owned the statue, Barrett or the owner of the land Rolf Sass. The hippo stood on land that Barrett put under an easement to the town; however, due the easement not being accepted, technically the land was owned by Rolf Sass who had bought the lot. Once the neighboring land was developed, Barrett, assuming it was on city land, and he still owned it, decided to remove it. However, Sass claimed it was his. In the end Barrett ended up with it and the statue has since been relocated to Atlantic, North Carolina.

Former Locations: The monument was moved at least twice: once to Chatham county from its original location and later to Atlantic, North Carolina. As the records do no reveal where exactly the hippo stood originally, the latitude and longitude provided are an estimate of its original location.