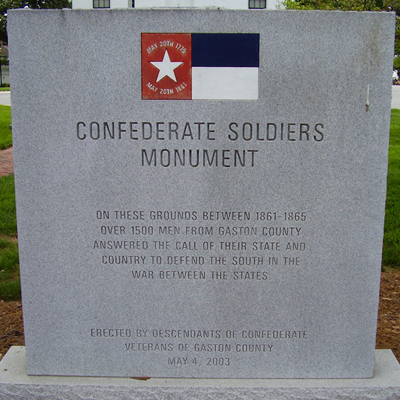 Monument to Gaston County Confederate Soldiers
Dallas
View complete article and references at Commemorative Landscapes of North Carolina at: https://docsouth.unc.edu/commland/monument/334
Description: This monument is composed a large, square piece of granite. It bears a color inlay of North Carolina's flag of 1861, ratified just after the state seceded from the Union. The inscription on the front commemorates the service of more than 1,500 Gaston County men who served as soldiers for the Confederacy. The rear of the monument is inscribed with the regiments of Gaston County soldiers and the Latin phrase "DEO VINDICI." The rallying cry of the Confederacy, this phrase is translated as "God will vindicate us."
Images: Rear inscription
Inscription:
Front: CONFEDERATE SOLDIERS / MONUMENT / ON THESE GROUNDS BETWEEN 1861-1865 / OVER 1500 MEN FROM GASTON COUNTY / ANSWERED THE CALL OF THEIR STATE AND / COUNTRY TO DEFEND THE SOUTH IN THE / WAR BETWEEN THE STATES. / ERECTED BY DESCENDANTS OF CONFEDERATE / VETERANS OF GASTON COUNTY / MAY 4, 2003
Rear: CO.1-11 87TH NC MILITIA / CO. M 16TH NC TROOPS / CO. H 23RD NC TROOPS / CO. B 28TH NC TROOPS / CO. H 37TH NC TROOPS / CO. H 49TH NC TROOPS / CO. C 2ND NC JR. RESERVES / CO. E 4TH NC SR. RESERVES / "DEO VINDICE"
Dedication date: 5/4/2003
Materials & Techniques: Granite
Sponsor: Sons of Confederate Veterans of Gaston County
Subject notes: Despite the general reluctance of the citizens of North Carolina to endorse secession and the Confederacy, Gaston County residents strongly supported the Confederate war effort and sent many men to the war along with neighboring Cleveland County. Dallas was the original county seat for Gaston County from 1846 until 1911 when the county government officially moved to Gastonia. At that time, the historic Gaston County Confederate Soldiers Monument was installed at the front of the new county courthouse in Gastonia. The monument in Dallas is significant as a 21st century commemoration by descendants of Confederate soldiers to their ancestors and the Confederate cause.
The State Flag of North Carolina of 1861 was ratified on June 22, 1861. It bears two dates -- the date of May 20, 1775, the date of the alleged revolutionary Mecklenburg Declaration, and the date of May 20, 1861, the date of North Carolina's secession from the Union.
Location: The monument sits in front of the historic Gaston County Courthouse on North Gaston Street in Dallas.
Landscape: The monument sits in the semi-circular lawn area between the street and driveway in front of the courthouse. It is surrounded by plantings and mature shade trees.
City: Dallas
County: Gaston
Subjects: Civil War
Latitude:
35.31606
Longitude:
-81.17614
Subjects:
Monuments
Places
Authors:
Commemorative Landscapes of North Carolina
Origin - location:
Gaston County
Dallas
From:
Commemorative Landscapes of NC, University of North Carolina Chapel Hill.

The Confederate History and