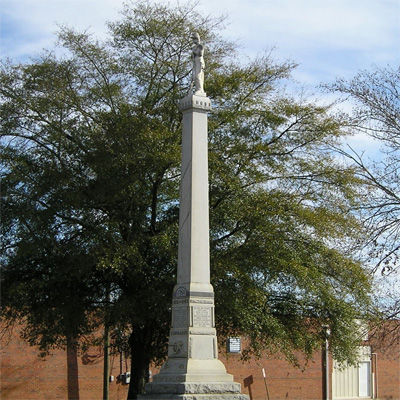 Description: The monument is composed of a granite statue of the Confederate Common Soldier placed atop a tall granite obelisk. The soldier stands at parade rest with a steadfast and fixed gaze, holding the barrel of his rifle. The base of the obelisk is inscribed on all four sides and presents bas-relief carvings of a cannon and crossed swords below the inscription on the front face. The front of the column shows a tall Confederate flag in bas-relief, unfurled and wrapped around its pole.

Inscription:
Front: CSA / 1861 - 1865 / TO THE / CONFEDERATE SOLDIERS / OF SCOTLAND COUNTY, / THE RECORD OF WHOSE / SUBLIME SELF-SACRIFICE / AND UNDYING DEVOTION / TO DUTY IN THE SERVICE / OF THEIR COUNTRY / IS THE FOND HERITAGE / OF A LOYAL POSTERITY / COMRADES / OUR CONFEDERATE HEROES


Right: "WE CARE NOT WHENCE THEY CAME, / DEAR, IN THEIR LIFELESS CLAY; / WHETHER UNKNOWN OR KNOWN TO FAME, / THEIR CAUSE AND COUNTRY STILL THE SAME, / THEY DIED AND WORE THE GRAY."


Rear: FIRST AT BETHEL, / FARTHEST AT GETTYSBURG, / AND CHICAMAUGA, / LAST AT APPOMATTOX

Unveiling & Dedication: General William R. Cox of Richmond, Virginia was speaker of the day, and a banquet was served to the veterans, the Sons of Veterans, and the Children of the Confederacy.

Post dedication use: In 2002, people gathered at the Confederate Monument to honor Confederate Memorial Day and the Immortal 600. A gun salute was performed by reenactors, and "Dixie" was sung prior to the laying of flowers on the steps of the monument.

Subject notes: The monument is now used as a meeting place during Confederate Memorial Day to honor the "Immortal 600", a group of 600 Confederate soldiers who were used as human shields to protect Union positions at Morris Island, S.C. Three members of the Immortal 600 were from Laurinburg.

Location: The monument sits in front of the Scotland County Courthouse on the corner of Biggs and Roper Streets.

Former Locations: The monument originally stood in front of the 1901 Courthouse in the center of the street at the corner of Main and Church Streets. It apparently became a traffic hazard and was moved onto the courthouse grounds. It was relocated to the contemporary county courthouse sometime following its construction in 1964.


The following image shows part of the monument just barely visible on the right side, in its location on the grounds of the 1901 courthouse and to the right of the Quakenbush Monument.

Landscape: The monument sits in a grassy triangular median between the street and the courthouse parking lot. The Quakenbush Monument is located a few steps away on the other side of a sidewalk.