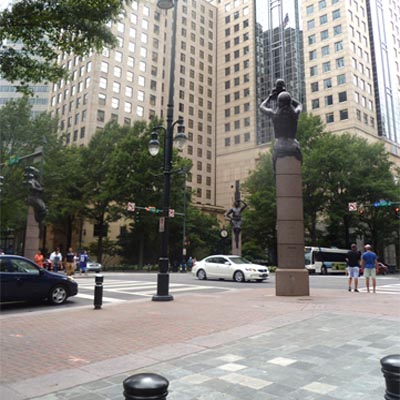 Sculptures On The Square
Charlotte
View complete article and references at Commemorative Landscapes of North Carolina at: https://docsouth.unc.edu/commland/monument/448
Description: This suite of four large bronze sculptures monumentalizes the forces that have shaped the development of Charlotte. The Future, Commerce, Transportation, and Industry are figurative representations that link the city's past, present, and future. Each sculpture is placed at a corner of the intersection of Independence Square, with The Future as the symbolic focus. The Future is represented as a young child, nurtured and playful in the arms of her mother who emerges organically from the branches of a dogwood tree. The figure also contains a hornets nest as a reference to Charlotte's historical nickname as a "Hornets Nest" of rebellion. Commerce is represented as as a realistic rendering of a gold prospector of the late 18th century, marking the gold rush in North Carolina and Charlotte's importance in the founding of the U.S. Mint in the city in 1835. The prospector empties his pan onto a head at his feet, allegedly the image of Alan Greenspan, former Chairman of the Federal Reserve, and demonstrating Charlotte's transition to a major banking and financial center. Industry is depicted as a female millworker with a child at her feet, an allusion to Charlotte's history as a mill town and the role of child labor in the era before federal labor laws protecting children from factory work. Transportation is represented by an African American male, portrayed with strength and dignity resting on his knees and with a hammer in his hands, a reference to the men who built Charlotte's rail lines, beginning the city's importance as a transportation hub. The number "1401" inscribed on the figure represents engine "1401", also known as Charlotte, who pulled trains through the city.
Each figure, weighing approximately 5,000 pounds, is mounted on a tall, thin granite column approximately 20 feet tall. The columns are modern and angular, with each bronze figure rising from the top, as if growing out of the granite. A plaque commemorating the sculptures as a gift to the people of Charlotte is located in the brickwork of the sidewalk behind the figure of The Future.
Image: Image of Future and Commerce
Inscription:
THE SCULPTURES AT / INDEPENDENCE SQUARE / BRONZE BOUNDARY FIGURES BY RAYMOND KASKEY / GIVEN TO THE PEOPLE OF CHARLOTTE / BY THE QUEEN'S TABLE, NOVEMBER 1995 / THE HISTORIC FIGURES OF COMMERCE, INDUSTRY AND / TRANSPORTATION REPRESENT ENTERPRISES WHICH HAVE / CONTRIBUTED TO CHARLOTTE'S GROWTH AS A MAJOR COMMERCIAL / CENTER. WHILE HONORING CHARLOTTE'S PAST, THE THREE FIGURES / ALL LOOK TOWARD THE FOURTH FIGURE, THE FUTURE. / COMMERCE / ON THE NORTHWEST CORNER, A PROSPECTOR PANNING FOR GOLD / REPRESENTS THE GOLD MINING BOOM WHICH FOLLOWED THE DISCOVERY / OF GOLD NEAR CHARLOTTE IN 1799 AND THE OPENING OF A U.S. MINT / HERE IN 1837. THE PROSPECTOR EMPTIES HIS PAN OVER A SECONDARY / FIGURE REPRESENTING BANKING AND FINANCE. / INDUSTRY / ON THE SOUTHWEST CORNER, A WOMAN MILLWORKER RECALLS / CHARLOTTE'S EARLY TEXTILE FACTORIES. BELOW, THE FACE OF A CHILD / REPRESENTS THE CHILDREN WHO LABORED ALONGSIDE PARENTS / IN THE MILLS DURING THE DAYS BEFORE ENACTMENT OF / CHILD LABOR LAWS. THE CHILD'S FACE IS A SELF-PORTRAIT OF THE / SCULPTOR, RAYMOND KASKEY, AS A CHILD. / TRANSPORTATION / ON THE SOUTHEAST CORNER, AN AFRICAN AMERICAN LABORER HONORS / THE BUILDERS OF THE FIRST RAILROADS IN CHARLOTTE IN THE 1850S, / LEADING TO THE CITY'S STATUS AS A TRANSPORTATION HUB. / THE NUMBER 1401 COMMEMORATES A STEAM LOCOMOTIVE NAMED / "CHARLOTTE" WHICH ONCE PULLED TRAINS THROUGH THE CITY. / THE EAGLE REPRESENTS AIR TRANSPORTATION. / THE FUTURE / ON THE NORTHEAST CORNER, A MOTHER AND CHILD SYMBOLIZE / THE FUTURE OF CHARLOTTE. BENEATH THE MOTHER FIGURE ARE / LEAVES AND FLOWERS OF THE DOGWOOD, THE STATE FLOWER OF NORTH CAROLINA. / A HORNETS' NEST CALLS TO MIND THE / HISTORIC NICKNAME FOR MECKLENBURG COUNTY.
Dedication date: 11/27/1995
Creator: Raymond Kaskey, Designer, Sculptor Laran Bronze, Supplier
Materials & Techniques: Bronze, granite
Sponsor: The Queen's Table
Cost: $500000
Subject notes: The statues were created by Washington, D.C. sculptor Raymond Kaskey. Kaskey was commissioned for the project by a group of Charlotte philanthropists known as the Queen's Table. The sculptures sit in the four corners of Independence Square, a location with significant historic and symbolic meaning in the development of the city. The intersection of Trade and Tryon Streets, considered to be the historical crossing of Indian trade paths, later became the City Center and the basis for the division of Charlotte into blocks and neighborhood wards. The intersection received the name "Independence Square" from the so-called Mecklenburg Declaration of Independence reportedly signed at Charlotte on May 20, 1775.
Controversies: Some citizens felt that the Queen's Table and the Arts Commission, a publicly funded entity, assumed too much authority in seeking the approval of the City Council for a significant piece of public art in the symbolic center of the city without the input of the broader public. With a few exceptions, apparently members of the Queen's Table have also tended to keep their identities secret.
Location: The sculptures are located on the four corners of the intersection of Tryon and Trade Streets.
Landscape: The sculptures sit on the edge of the brick sidewalk feet from the street and surrounded by the modern cityscape of Charlotte, with tall buildings rising behind them.
City: Charlotte
County: Mecklenburg
Subjects: Industry ,Local History
Latitude:
35.22711
Longitude:
-80.84303
Subjects:
Monuments
Places
Authors:
Commemorative Landscapes of North Carolina
Origin - location:
Mecklenburg County
Charlotte
From:
Commemorative Landscapes of NC, University of North Carolina Chapel Hill.