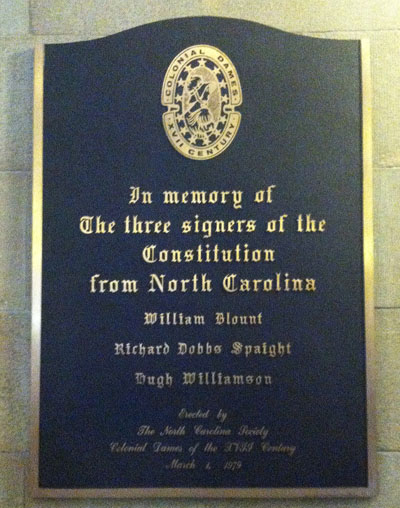 Description: This commemorative plaque honors the three members of the North Carolina delegation to the Constitutional Convention of 1787 who were signers of United States Constitution. The plaque is bronze and rectangular, with a simple single scallop rising on the top edge. Above the inscription the plaque bears the insignia of the National Society Colonial Dames of the XVII Century, the plaque's sponsor.

Inscription:
In memory of / The three signers of the / Constitution / from North Carolina / William Blount / Richard Dobbs Spaight / Hugh Williamson / Erected by / The North Carolina Society / Colonial Dames of the XVII Century / March 4, 1979

Unveiling & Dedication: The plaque was dedicated on March 4, 1979.

Subject notes: Three North Carolinians signed the U.S. Constitution at the Convention of 1787 in Philadelphia: Hugh Williamson, originally from Pennsylvania; Richard Dobbs Spaight, originally from New Bern; and William Blount, of Bertie County. The North Carolina legislature had selected Governor Richard Caswell, William R. Davie, Willie Jones, Alexander Martin, and Spaight to attend the Constitutional Convention as delegates. However, Jones did not support the concept of the federal government, and Governor Caswell was ill at the time. Governor Caswell selected Blount and Williamson to attend in their place, and Davie and Martin vacated the convention prior to signing, leaving Blount, Williamson and Spaight as signatories.

Location: The plaque is located in the rotunda of the North Carolina State Capitol building on West Morgan Street.