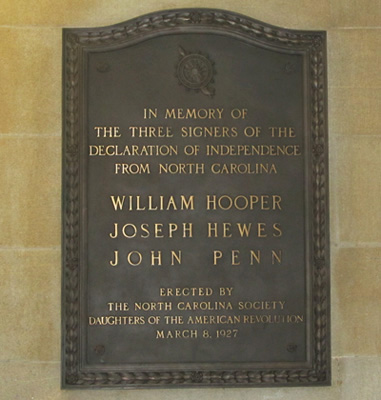 Signers of the Declaration of Independence Plaque
State Capitol, Raleigh
View complete article and references at Commemorative Landscapes of North Carolina at: https://docsouth.unc.edu/commland/monument/431

Description: This plaque commemorates North Carolina's three signers to the Declaration of Independence: William Hooper, Joseph Hewes, and John Penn. The bronze plaque measures approximately three feet by four feet, with a single decorative scallop rising along the top edge of the frame and a leaf motif around the entire perimeter. The interior of the plaque bears bas-relief burnished lettering commemorating the signers and includes the insignia of the plaque's sponsor, the Daughters of the American Revolution. Small decorative bas-relief coins or medallions frame the four corners of the inscribed area of the plaque.

Inscription:
IN MEMORY OF / THE THREE SIGNERS OF THE / DECLARATION OF INDEPENDENCE / FROM NORTH CAROLINA / WILLIAM HOOPER / JOSEPH HEWES / JOHN PENN / ERECTED BY / THE NORTH CAROLINA SOCIETY / DAUGHTERS OF THE AMERICAN REVOLUTION / MARCH 8, 1927

Unveiling & Dedication: Society members from across the state gathered along with members of the general assembly and others for the services which began in the in the chamber of the House of Representatives. A young girl, Katherine Glascock, presented bouquets to society officers from the Caswell-Nash chapter. Attendees then moved to the rotunda for the unveiling. Josephus Daniels, then president of the North Carolina Literary and Historical Society, gave the address after introduction by Mrs. W. O. Spencer. Mrs. W. B. Murphy presented the tablet to Governor MacLean, who remarked in his acceptance speech that it had taken North Carolina 150 years to commemorate the signers. A number of children helped with the unveiling, including Miss Margaret Greaves Penn of Carthage, a descendent of both Hooper and Penn, and Master Pembroke Greaves Reese, a descendant of Hooper. A musical interlude was provided by solos sung by Miss Virginia Eastill, accompanied on the piano by Miss Era Roundtree.

Subject notes: North Carolina had three signers to the Declaration of Independence in July of 1776 at Philadelphia: Joseph Hewes, a merchant and justice of the peace from Edenton in Chowan County; John Penn, a farmer from Island Creek in Granville County; and William Hooper, a lawyer and delegate from New Hanover County.

Location: The plaque is located in the rotunda of the North Carolina State Capitol building on West Morgan Street.