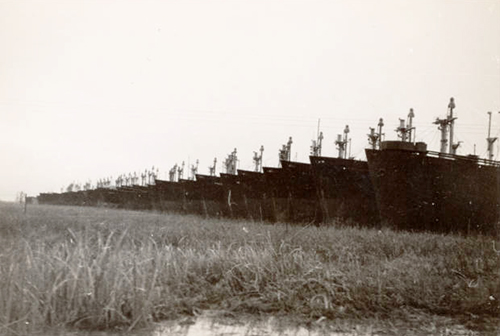 The Mothball Fleet, the nickname for the U.S. Maritime Commission's reserve fleet, was located on the Brunswick River across from the city of Wilmington. Following World War II, Congress made the Maritime Commission responsible for determining the number and type of vessels to be placed in reserve in case of future expansion; the southeastern North Carolina site was one of four in the country. The lay-up basin for the reserve fleet was operational when the first ship arrived in August 1946. The ships placed in "mothballs" had their hulls scaled, coated with oil, scaled again, and finally coated with red oxide paint, which stopped the rusting of metal surfaces. The internal system of "mothballing" consisted of draining all of the various systems and pumping in oil under pressure. All turbines, engines, and gears were also coated with an oily film.

A total of 648 ships were, at varying times, moored in the reserve fleet. The majority of vessels stored in the facility were of the Liberty class, some of them built in Wilmington. Over the years many were scrapped, sold to private concerns, sunk for artificial reefs, or recommissioned. The last ship to be removed from the mothball fleet was the USS Dwight W. Morrow, which was scrapped in February 1970.