The North Carolina Transportation Museum at Spencer is a North Carolina State Historic Site occupying the buildings of the Southern Railway's central repair facility, begun in 1896. Approximately halfway between Washington, D.C., and Atlanta, it was the company's largest steam locomotive servicing facility. Both Spencer Shops and the town of Spencer that grew up around it were named for Samuel Spencer, the first president of Southern Railway. By 1932 the shops performed daily light repairs on 75 steam locomotives and turned out a completely rebuilt locomotive each day. The company also established its largest freight transfer facility at Spencer, where more than 40 trains set out every day. At its peak the company retained 2,500 workers and was the largest employer in the area. 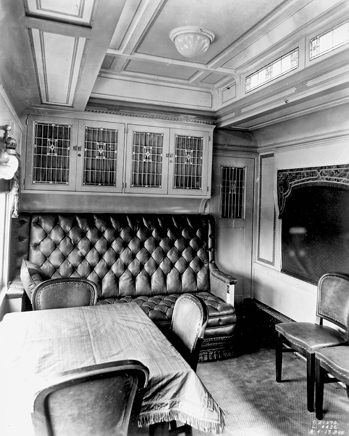 In the late 1940s and the 1950s diesel locomotives replaced trains driven by steam, and the need for the kind of service delivered at Spencer declined. In 1960 the main shops closed, and only a few employees remained to make light repairs and refuel diesel locomotives and freight cars. All work stopped in 1979, when the Southern Railway moved to a modern complex across the Yadkin River at Linwood, site of the new freight switching yard.

When it became known that Spencer Shops would be closing, preservationists and local legislators took actions to preserve the historic buildings as a Transportation Museum. Funds were appropriated for a feasibility study, and Southern Railway was approached about selling or donating the property and buildings. In September 1977 railway president L. Stanley Crane presented a deed to nearly 4 acres on the site as a gift to the people of North Carolina. In 1979 the company donated 53 more acres of land and several historic buildings. Funds from the General Assembly made it possible to begin to stabilize and restore the buildings.

The first exhibit area opened in 1983. Others followed as restoration and repair of buildings and equipment could be completed; next to open were the master mechanic's office, flue shop, roundhouse, and a narrated on-site train ride for visitors. The North Carolina Transportation History Corporation was chartered in 1977 as a nonprofit support group to assist in fund-raising and in the acquisition and restoration of artifacts. Numerous former employees of the Southern Railway, retired but still living in the vicinity, spent countless hours restoring and maintaining equipment as well as operating locomotives to pull rolling stock to give visitors a true feel for rail transportation.