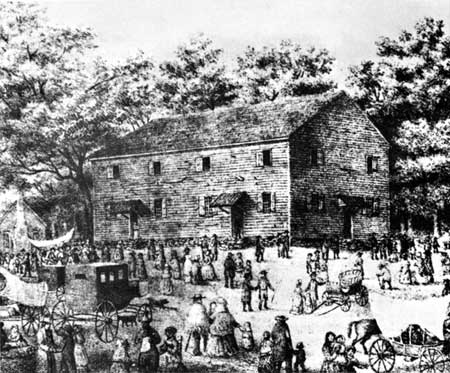 The Battle of New Garden was a series of Revolutionary War clashes that took place on the morning of 15 Mar. 1781 immediately preceding the Battle of Guilford Courthouse. The battle began just after sunrise at New Garden Friends Meetinghouse west of Greensboro and extended along New Garden Road north of the Crossroads over the next three hours. Involving both cavalry and infantry, the hostilities opened with a brief skirmish at the meetinghouse. There, Lt. Col. Banastre Tarleton's British scouts discovered the American pickets, who promptly retreated toward Lt. Col. Henry Lee's vanguard. Tarleton's force, numbering nearly 600, came from his Loyalist cavalry legion, the German Yagers and Bose Regiment, and a later reinforcement of the Welsh Fusiliers. Lee's command, comparable in size, consisted of his cavalry, Col. William Campbell's veteran riflemen, and Virginia militia.

The first of the three "sharp encounters" was a cavalry assault on New Garden Road, where Lee's troops drove off Tarleton's dragoons in some confusion. Tarleton's retreat ended at the meetinghouse, where he was joined by the German infantry, which stood firm against Lee's advance. Among the several casualties was Tarleton himself; he was seriously wounded in the hand but remained in the action for the rest of the day. The approach of Lord Charles Cornwallis's main army forced Lee to retire north to the Crossroads, where he took up a strong position in a wooded area. Another general action ended finally with the commitment of the Welsh Fusiliers, which dislodged the stubbornly resisting Americans who now retreated the three miles to Gen. Nathanael Greene's position just south of the county seat.

The spirited actions, including a brief skirmish, a swirling cavalry clash, and two general engagements, inflicted a number of casualties on the British, led to a significant delay, and contributed to the fatigue of an already weary army that had set out on a predawn advance without breakfast. That day a significant portion of the British army endured two battles, involving some five hours of combat. New Garden was preliminary to the main action at Guilford Courthouse that afternoon, but it has been established that in time elapsed, numbers involved, casualties, and complexity of maneuver, the conflicts near New Garden Friends Meetinghouse deserve to be considered apart from the greater battle that day that has in history so overshadowed the events of the morning.

John Buchanan, The Road to Guilford Courthouse: The American Revolution in the Carolinas (1997).

New Garden Meetinghouse during the beginning of the Battle of Guilford Courthouse. Image courtesy of National Park Service. Available from http://www.cr.nps.gov/history/online_books/hh/30/hh30h.htm (accessed June 1, 2012).

I had been at Chichester

I had been at Chichester meeting house recently at Marcus Hook Pa. and then visited The Brick Sunrise Md. .I enjoyed my beginning that morning at Burlington N.J. (William Clayton) tracking southward. My Quaker roots ended up at Cane Creek N.C. but I have since learned that John Piggott was at New Garden before he married Sarah Pike my ancestors. Great heritage.