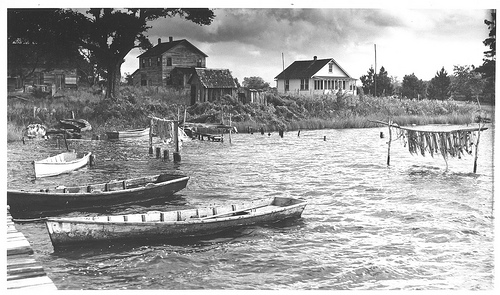 The Civil War engagement called the Battle of New River occurred in Onslow County over a three-day period beginning 23 Nov. 1862. In preparation for the action, Lt. William B. Cushing of the Union navy took his iron-hulled gunboat, the converted side-wheel tug Ellis, up the New River. His mission was to capture Jacksonville, the seat of Onslow County, 20 miles from the river inlet; destroy any saltworks he encountered; and seize any blockade-runners found in the river. The blockaders sought sanctuary from Union cruisers in the smaller, less accessible havens of the New River. Saltworks had materialized along the inlets and sounds to produce the increasingly scarce but always vital commodity.

On the morning of 23 November, Cushing arrived at the Jacksonville dock before Confederate pickets could warn the inhabitants of his approach, and a landing party quickly occupied the public buildings. After raising the U.S. flag above the courthouse and capturing two schooners, a store of clothing, numerous small arms, and several contraband slaves, Cushing withdrew. But the local Confederate authorities were now determined to have their revenge.

Two companies from the 2nd North Carolina Cavalry harassed the Ellis as it attempted to reach the inlet before dark. Cushing, impeded by the slower-moving schooners and engaging the cavalry on both banks, was compelled to anchor in midstream when darkness arrived. Meanwhile, the Confederates constructed an ambush on the west bank of the river. The next morning Cushing managed to avoid the ambush and drive off the Confederates, but he ran aground within easy range of the temporarily abandoned positions.

Unable to free the stranded gunboat, Cushing used the time to strike ashore and burn a nearby saltworks. Then, uncertain that the next morning's tide would free his ship, he lightened the vessel, leaving one gun, and sent the schooners downstream with all but six volunteers. During the night, the Confederates moved back into their positions overlooking the river.

At first light on 25 November, the Confederates opened fire and rapidly overwhelmed the Ellis's depleted crew and single gun. Unable to escape with the ship, Cushing set it afire and manned the remaining ship's boat to make for the awaiting schooners. The exultant Confederates attempted pursuit but were deterred by the thunderous explosion of the Ellis's magazine, and Cushing safely reached the Atlantic.