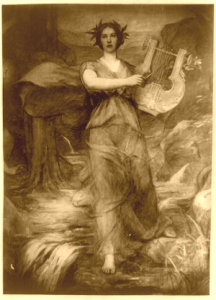 Arthur Abernethy was appointed Poet Laureate in November of 1948, just before the end of Governor R. Gregg Cherry's administration.  According to the official "fiat" conferring the honor on the poet, Abernethy's term was to expire with the end of Cherry's term.  Abernethy was therefore officially Poet Laureate for only a few weeks, from November 28, 1948 through January 5th, 1949.  However, because Governor William Scott did not appoint a successor, Abernethy remained the designated Poet Laureate until August 1953, when Governor William Umstead appointed James Larkin Pearson to the post.

Abernethy's career was long and varied.  At the age of 18, he was already a professor of Latin and Greek at Rutherford College, the school his father had founded.  After a few years, during which he also attained his MA and PhD, Abernethy became a journalist, contributing columns to papers in Milwaukee, Pittsburgh, New York, and Philadelphia, as well as for the Charlotte Observer.  On his return to the state, he became a Magistrate and Justice of the Peace, and frequently filed his annual reports in verse.

In the meantime, Abernethy found time to write more than 50 books and 3000 poems (according to his own estimate).  The books covered history and historic speculation (Did Washington Aspire to be King?), regional and southern folklore (Moonshine: being Appalachia's Arabian Nights), and evangelical subjects (Where are our dead?).  Surprisingly, he appears to have published none of his poetry in book form.

According to the entry in The Heritage of Burke County, Abernethy received recognition from both Governor Hoey (1937-41) (being made an "Honorary Citizen for Life of Charlotte, Hickory, Asheville, and Valdese") and President Roosevelt, who named him an American Ambassador of Sunshine in 1938.  He crowned his literary career by requesting and receiving the Laurel from Governor Cherry, with whom he was a close friend.

Late in life, Abernethy made another career change, and followed his father and brothers into the clergy.  He was pastor for several years in churches in Belmont, NY and Cincinnati Ohio, and spent two years as minister in the Asheville Christian Church.  After retirement, he served as Mayor of the town of Rutherford College.  He died in May 1956.