Debutante balls, or cotillions-social events in which parents formally present their teenage daughters to adult society-have been a feature of U.S. culture since the late nineteenth century. These balls, some of them all-white affairs, continue to be held in small numbers in North Carolina and other states. They remain controversial because of their unconcealed exclusivity, which is often based on economic and racial distinctions. The private, closed nature of some of the clubs that sponsor debutante balls has raised concern among those who view them as anachronistic and disturbing remnants of a racially segregated past. Supporters of debutante balls, however, argue that the events are important cultural institutions rooted in honorable traditions of personal and family pride, women's stature, and social responsibility, as well as a constitutional right to form private organizations. 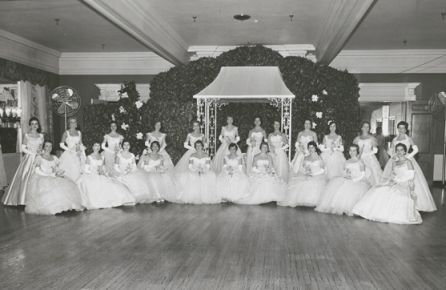 The oldest and perhaps most influential ball still held in the state is the North Carolina Debutante Ball, sponsored annually by the Terpsichorean Club of Raleigh. Long considered the premier social event in the state, it originated in 1923 as the "Raleigh Fall Festival," sponsored by the merchants of the city. Prominent young white ladies from throughout the state were presented as candidates for Queen of the Festival before a queen was crowned by the governor. In 1927 the Terpsichorean Club was formed and held the first North Carolina Debutante Ball. The purpose of the club, which derived its name from the Greek mythological muse, Terpsichore, the goddess of dancing and choral song, was to "sponsor annually a ball for the presentation of North Carolina Debutantes to be held in Raleigh on the first weekend after Labor Day."

As the debutantes' activities grew from a one-night ball to a weekend of parties, teas, luncheons, and a second big dance, the ritual of having the debutantes formally presented was established. Each participant originally chose one chief marshal and four assistants. In 1956 the number of assistant marshals was reduced to two, and in 1963 the selection of fathers as chief marshals was encouraged, a change that greatly enhanced the dignity and significance of the occasion for the debutantes and their families.

The North Carolina Debutante Ball has been held every year since 1923, except during World War II. Because of the polio epidemic in 1948 it was postponed until a few days after Christmas, and it was postponed for the same period in 1996 because of the damage wrought across the state by Hurricane Fran.

How did the tradition of the

How did the tradition of the debutante stools come about? Was it something having to do with their dresses?

According to my friend that

According to my friend that was a debutante in North Carolina, it is a tradition that started because there is waiting room where everyone waits for the ball to start. There are no chairs in the room, so it is a way for debutanes to have place to sit or lean on before the event.

Hello,
I recently found a charm bracelet at a thrift shop and after looking at it I know the lady that owned it or her family would probably love to have it back. I could barely read her name but it looks like Alahe Thela 66-69 on one of the charms and her D/O/B was 10/19/29, She attended the Debutante Ball in 1969. I thought maybe you could give me more information on her and hopefully be able to return this bracelet to the family. Thank you for your help and I hope to hear back from you.

How do you nominate someone

How do you nominate someone to be a debutant?

Unfortunately, we do not have

Unfortunately, we do not have any additional information about these events and have had difficulty locating a website for the club. You may want to contact the Chamber of Commerce to see if they have any local information that may help. Thanks for visiting NCpedia.

Is there an archive of the

Is there an archive of the debutante balls? I've read my great grandmother was presented at one in the 1930s. I'd love to see a picture of her!
Thanks for any information!

Thank you for visiting NCpedia and this entry. Unfortunately, we do not have any additional information about these events and have had difficulty locating a website for clubs or an archive. You may want to contact the Chamber of Commerce to see if they have any local information that may help.

Out of curiosity, is the

Thank you for visiting NCpedia and this entry. Unfortunately, we do not have any additional information about these events and have had difficulty locating a website for the club. You may want to contact the Chamber of Commerce to see if they have any local information that may help.

when do invitations come out

when do invitations come out for 2017 debutantes??
thanks