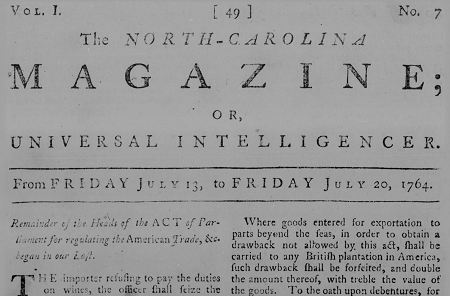 The North-Carolina Magazine; or, Universal Intelligencer, was the first magazine in North Carolina. It was published by printer James Davis in New Bern during a period when his North-Carolina Gazette, the state's first newspaper, was suspended. The first issue, dated 1-8 June 1764, was eight pages, printed without column rules and two columns to the page. The magazine was meant to be bound annually; pages were numbered consecutively from the first issue until the last, four years later.

The lack of regular mail greatly limited the amount of news in the North-Carolina Magazine. Instead, it was filled with long extracts from the works of religious writers and historians or selections from British magazines. In the fifth issue, dated 6-13 July 1764, a long history of the Roman Empire was begun and continued through several succeeding installments. A page and a half was given to advertisements, including several offering rewards for the return of runaway slaves and one from Davis presenting for sale a "Collection of All the Acts of Assembly of the Province of North Carolina." A notice to the freeholders of Christ-Church Parish of an election to be held for new vestrymen advised: "There is a fine of Twenty Shillings on every Freeholder in the Parish who fails to attend, and give his vote."

The North-Carolina Magazine; or, Universal Intelligencer, at the North Carolina State Archives.