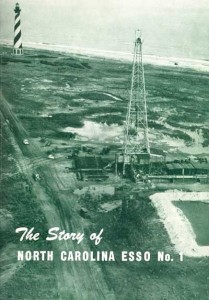 Geologists for many years have recognized that North Carolina is "dry hole country" with almost no potential for hydrocarbon reserves. Despite this fact, several individuals and companies have drilled for oil within the borders of the state. The search for oil in North Carolina began in 1924, when a well was drilled to a depth of 2,404 feet in Craven County. The well found no indications of hydrocarbons and was the first of 126 dry holes drilled in the state.

Almost all of the exploratory wells have been drilled along North Carolina's coastline in hopes of reaching marine sediments. Five counties-Brunswick, Carteret, Dare, Hyde, and Onslow-account for 79 of the wildcat locations. The rest of the wells were drilled primarily in other coastal counties. Seven wells have been drilled inland in Lee County near Sanford. Most of the wells were drilled to relatively shallow depths: 105 wells are shallower than 5,000 feet and 75 of these are less than 2,500 feet. Only 1 well, drilled by Exxon in Dare County, was deeper than 10,000 feet.

Chevron (now ChevronTexaco Corporation) during the mid- and late 1990s attempted to gain permission to drill a deep test well offshore from the Outer Banks, about 40 miles from Cape Hatteras. The target of this well, which was to be drilled in nearly 2,700 feet of water, was a reef structure on the continental shelf that was believed to contain 3 to 4 trillion cubic feet of natural gas. The project was delayed by legal and environmental concerns as well as regulatory difficulties.