Moravians first brought the organ into North Carolina for use in worship services. Joseph Ferdinand Bulitschek, a Salem cabinetmaker and millwright, built two early organs for Moravian congregations in the Wachovia settlement. Bulitschek's organ for Bethania, built in 1773, was in use until destroyed by fire in 1942. Other eighteenth-century organ builders included Jacob Loesch of Bethania and a Mr. Stirewalt of Rowan County. 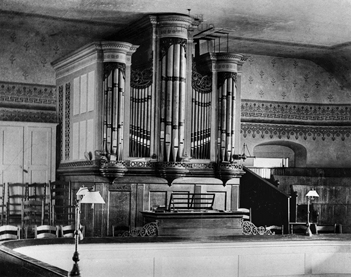 Two of ten surviving organs by the renowned Moravian organ builder David Tannenberg of Pennsylvania are housed at Old Salem. The first was installed in 1798. New York's Henry Erben, touted as America's premier organ builder of the nineteenth century, built five organs in North Carolina by the mid-1840s. Christ Episcopal Church in Elizabeth City purchased one of Erben's organs in 1845.

Theater organs, pipe organs with tremulant and percussion sounds made by wooden pipes, were manufactured in the early twentieth century for use in accompanying silent movies. Robert Morton built theater organs for Lumberton's Carolina Civic Center and Greensboro's Carolina Theater. A Barton organ from Milwaukee's Upton Theatre is in a private Raleigh residence. The enormous Moller organ in Charlotte's Calvary Church, which includes theater organ pipes, is the thirteenth-largest organ in the world.

Duke University Chapel boasts three organs. The Aeolian, built in 1932, was the last organ the Aeolian Organ Company built before merging with the E. M. Skinner Organ Company. Recently renovated, its pipes number around 6,900. In 1976, the organ now installed over the chapel entrance was completed in the shop of the famous D. A. Flentrop in Zaandam, Holland. The tones of its 5,033 pipes reflect Dutch and French organs of the early eighteenth century, considered the "golden age of organs." In 1997 John Brombaugh and Associates of Eugene, Ore., installed an organ with 960 pipes in a swallows nest gallery on the middle north wall of Duke Chapel for use during weekly worship services. Since then, the Flentrop is used primarily for processionals and recessionals at larger worship services, university events, and recitals. A Flentrop organ also was installed at Reynolda Presbyterian Church in Winston-Salem in 1961.

Two pipe organ builders, the Knowlton Pipe Organ Company in Davidson and Cornel Zimmer in Denver, currently work in North Carolina. Zimmer also manufactures digital organs. Allen Organ Company, based in Macungie, Pa., made electronic and digital organs in Rocky Mount for some 30 years until closing the plant in March 1999.

Orpha Ochse, The History of the Organ in the United States (1975).