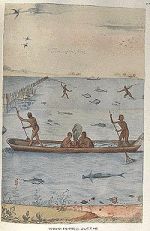 The Pamlico Indians lived south of the Pamlico River in present-day Beaufort and Pamlico Counties and were known as the Pomouik by members of the 1585-86 Raleigh expeditions. A smallpox epidemic in 1696 nearly destroyed the tribe. By 1709 John Lawson found the survivors living in a single village with 15 "fighting men." Lawson recorded a small vocabulary from their language, which confirms their Algonquian affiliation.

"Indians Fishing", watercolor by John White, created 1585-86. Depicts a coastal Algonquian Tribe. Image courtesy of the Trustees of the London Museum, accessed through the National Park Service. Available from https://www.nps.gov/nr/travel/jamesriver/colonization.HTM (accessed May 23, 2012).

Have enjoyed articles related to Indian Heritage Month. Just completed the John Lawson book of his journey through SC and NC. There are a lot of references to the different tribes encountered. Unofficially the first Thanksgiving occurred in NC and Va. Indians were an integral part of the Immigrants’ (English, Spanish, etc) survival by sharing food, survival skills, and hunting techniques. Americans owe their gratitude to the early native Indians who were at Roanoke, Jamestown and Isle of Wight years prior to Plymouth Rock’s Thanksgiving celebration. Greatful and appreciative for the many unofficial Thanksgivings

this one does not leave very

Please let us know if you are looking for something specific and we'll try to help.

You may be interested in this NCpedia page that organizes many resources on Native American History in North Carolina. There are more articles on settlement and other cultural topics: http://ncpedia.org/exploring-north-carolina-native